Gallup published a few interesting polls this week.  Let's start out with "Self-Reported Gun Ownership in US is Highest Since 1993"


PRINCETON, NJ -- Forty-seven percent of American adults currently report that they have a gun in their home or elsewhere on their property. This is up from 41% a year ago and is the highest Gallup has recorded since 1993, albeit marginally above the 44% and 45% highs seen during that period. 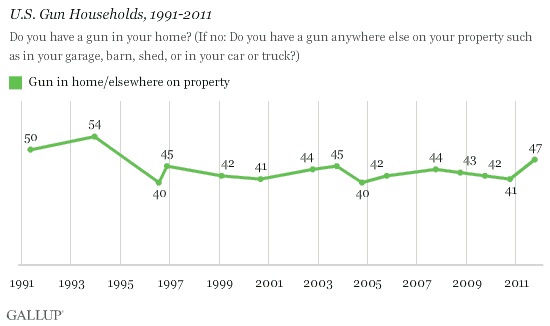 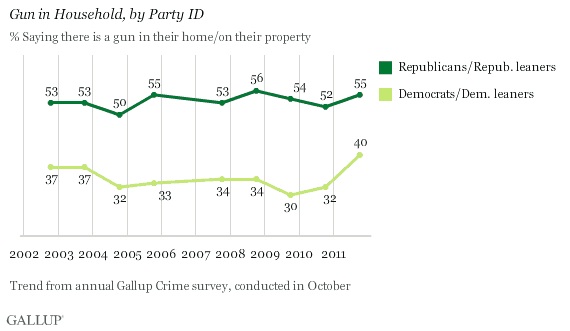 My big doubt here is that everyone knows that 2009 and 2010 were enormously big years for gun sales, yet the first chart shows a small decrease year over year in that period. "A record 14.033,824 NICS Instant Background checks were performed in 2009" for one, and while I can't find a similar one-link summary, it looks like 2010 was up over 2009 (sample data here).  It seems that if the number of checks was all time record high in those two years, either a lot of people who already own guns were buying more guns, or they didn't tell the Gallup pollster that they had a gun.

Nationwide, attitudes continue to swing in our favor.  The other cool story up on Gallup is, Record-Low 26% in U.S. Favor Handgun Ban".  The lead is:


PRINCETON, NJ -- A record-low 26% of Americans favor a legal ban on the possession of handguns in the United States other than by police and other authorized people. When Gallup first asked Americans this question in 1959, 60% favored banning handguns. But since 1975, the majority of Americans have opposed such a measure, with opposition around 70% in recent years. 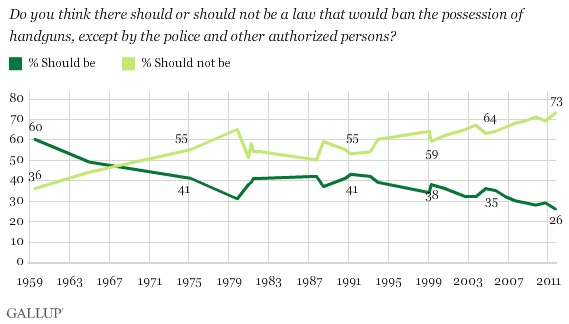 I think we all know what's going on here: since around September or October 2008, when people realized "Firearms Salesman of the Century" Barack Obama was going to be president, more and more folks have realized he is not interested in or capable of saving the country and are investing in self-preservation.  I don't think it's fear of a zombie apocalypse. (and, seriously, am I the only one who thinks this whole zombie thing has jumped the shark?  I mean, c'mon, Hornady?)
Posted by SiGraybeard at 9:28 PM