Via Sipsey Street Irregulars, I learned that the visitor many of us know as Dennis .308 has gone on to his maker.  I can't say I really knew Dennis, but he visited here regularly, commented on occasion and always came across as one of the good guys, someone you'd be proud to know.  Mike V describes him as a "loyal three-per" and Oath Keepers had nice things to say as well.  Thanks for your service, good sir.  We'll see you on the other side.

I have a habit of making fun of my stupidity, and I outdid myself two weeks ago.  To begin with, I put my nice little ultra compact digital camera into my pocket for a fishing trip, and then put the camera into the washing machine in my cargo pants.  Mrs. Graybeard heard something thumping in the dryer and retrieved it.  To make a long story short, scratch one camera.  Now that camera was a Nikon Coolpix S4000, which I bought on close-out sale primarily to do HD videos - the fact that it was a decent little camera for digital pictures was a plus.  See, I have this idea I'm going to do some CNC gunsmithing and put some videos up on YouTube to go with the crap-o-vision video I have up there now (uhhh)...

Rather than go look for a new replacement, I found a seller on eBay who has factory refurbs of this model.  They go for $50, more or less, so I started bidding on them.  Wouldn't you know they go for over $60 if I bid, but otherwise stay low?  Didn't win any.  Last weekend, I picked another one out of his auction list and won!  Cool beans!  Wednesday it got here and it just didn't seem right - and then I realized I had bought the wrong camera!  Well, the seller agreed to replace it for refund (I'm out $20 shipping both ways) and I'm back on the prowl for a replacement camera. 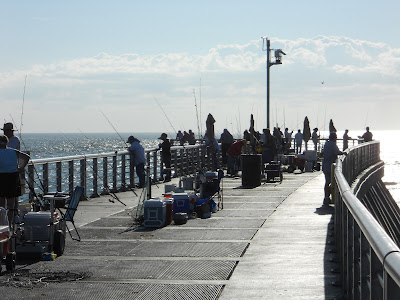 (not exactly, the last picture out of the camera, but just about... Sebastian Inlet, Florida on a quiet Sunday morning in October)

Come to think of it, if any of you have a make/model of a decent little camera, post it in the comments.  What I'm looking for is 720P HD videos.  I'd rather not spend hundreds, but playing the auction game hasn't been fun.  I like the idea of a camera I can use for video and still pics, too.  Nikon had a bunch of Coolpix models, Panasonic had the Lumix models, and I'm sure the other guys did, as well.
Posted by SiGraybeard at 9:05 PM