No one tagged me, but all the cool guys are doing it...
My first car was a six month old Ford Pinto.  1972, just as I was getting ready to graduate high school.  It was nearly new, dark green, a hatchback, with the "great big" 2000cc engine, four speed manual transmission and almost nothing else.  No air conditioning.  AM-only radio.  My older brother, who was far more into cars than I ever was, bought it brand new, and was just happy to have me agree to take over payments.  I thought I could manage payments, and somehow did.  Bro' had taught me how to drive a stick shift, so I could drive it, and I learned the hard way that leaving rubber in first through third got really expensive when those tires needed to be replaced!  It looked a lot like this, although I recall a darker shade of green. 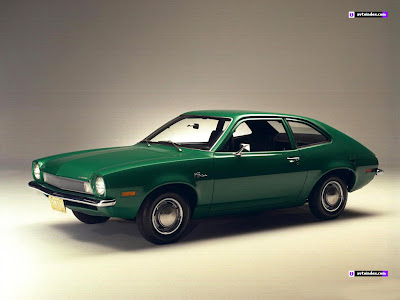 This is the car I grew up in.  Got some discount knowledge at the Junior College.   Did upper division school in biochemistry.  Got my first jobs as an electronics technician.  I always joked that Ford occasionally made a really good car and that was it.  It just seemed reliable.  Well, it left me on the side of the road maybe three times.  Those cars had a rubber timing belt that would just pop with no warning (not even a post card or threatening phone call!).  I remember getting it into the driveway, hearing a strange sound, and getting out to see my radiator emptying onto the black top.  The water pump had blown.

All you young whipper-snappers might not remember or know that Pintos had a few well-known flaws: in case of rear impact, early models (mine) had a tendency to rupture the fuel tank and explode.  Fewer people tailgated me when this was in the news.  There was a recall, and Ford installed a heavy plastic shield between the differential pumpkin and the gas tank.  The other problem was that the rear hatchback door would rust badly, due to the aerodynamics of the car.  Exhaust stayed near the rear of the car, trapped by the airflow.  If your car was damp, which is pretty much every day, some exhaust gases form acids on the metal and eat it away.    Later cars went to fiberglass hatches.  I think I eventually had one of those.

It was a great car for fishing the way I fished: the rear seat folded flat, and long rods just laid down the center.  Carpet kept them from sliding around.  You could carry lots in it.  I remember going camping with a large tent, gas stove, lanterns, and you name it.  That car carried it all.  I did a lot of my own work on that car; it was before catalytic converters and electronic ignitions.  Points and plugs that had to be cleaned and gapped regularly.  I replaced water pumps and timing belts.  Rebuilt the carb.

A friend and I had driven to Gainesville (University of Florida) from home in north Miami; he was considering grad school there and I was considering finishing my BS there.  That's a long drive now, but with fewer interstates it was harder in those days.  We had left before dawn to get to UF by afternoon.  Driving home on the Florida Turnpike, after a long day on the road, I started to get road hypnosis.  I remember fading in and out.  My friend was asleep, I couldn't get anything on the radio, and it was tough staying awake.  All of a sudden, my headlights started flashing on and off.  Woke me straight up.  A rest plaza was a few miles ahead, so we stopped, and got coffee (I didn't drink coffee in those days).  The fear of my lights failing kept me on high alert the rest of the six hour drive home.  They never flashed like that again that night.  Nor ever again.
Posted by SiGraybeard at 9:54 PM

Labels: just foolin around, Me