H/T to Bayou Renaissance Man for reminding me of a news item I saw earlier this week: the world's largest yellow diamond is to be auctioned on Nov. 6, by Sotheby's, the famous UK auctioneers.


Sotheby's announced today that it will auction off the Sun-Drop diamond—a 110-carat hunk of carbon that ranks as the largest known pear-shaped fancy vivid yellow diamond in the world—at an auction in November.  (Nice video here) 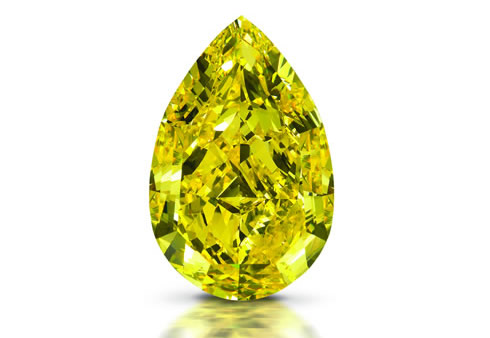 It's expected to sell for between $11 and $15 million dollars.

As someone who has faceted gems, and been (at least tangentially) around the gem trade, I have some observations that I hope are worthwhile.

Diamonds cause some strange reactions among people.  Some just value them inherently, some have no use for them.  In the last few years, commercial quantities of large, gem-grade, synthetic diamonds have hit the market (see good summary here), and many people feel the value of "out of the ground" diamonds will collapse.  (Abrasives-grade diamond has been synthesized since the 1950s)   It's probably worthwhile to point out a couple of strict, legal definitions in the gemstone world: a synthetic is a lab-created stone that has the same chemical composition of the natural stone, so it has all the same physical properties as the natural stone;  a simulant is a stone with different chemical composition, and different properties, but that looks like the stone being simulated.  It's not just wrong to call a Cubic Zirconium a synthetic diamond, it's illegal.

Rubies have been synthesized since the late 1800s, and have been available in any quantity you want since then, but that really hasn't affected the price of rubies out of the ground.  The highest quality synthetic rubies are hundreds of dollars per gram; the bulk (Verneuil process) are well under a dollar per gram (for a few months, this eBay link will work).  A high quality natural ruby can hit thousands of dollars per carat (1/5 of a gram).

The synthetic yellow diamonds won't affect the price of a natural stone like this.

It's a very rare thing.  In the world of gemstones, the overwhelming majority are tiny and poor quality.  The majority of diamonds in particular, are tiny, cloudy, gray, included and best suited as abrasives.  Diamonds are not particularly rare stones, and it's true that annual production is keyed to the expected wedding rate in the US and Japan.  Nice-colored diamonds of mid-grade quality are available in any quantity you want.  Genuinely rare stones, like a large, "A" color change Alexandrite that goes from almost holly berry red to holly leaf green depending on the ambient light, simply don't exist.

There are people who like to own rare, beautiful things: a once-in-history rarity; an enormous, perfectly-colored diamond out of the ground is infinitely more rare and precious than a manufactured item.  It's the same urge that leads some people to make large string or aluminum foil balls.  Since I'm sure whomever buys this has the money, they're not a struggling kid buying an engagement ring, I hope they enjoy it.  I sure wouldn't buy it, but I don't really care much for diamonds.  I'd prefer a nice large black opal any day.