Self Portrait by a Giant Triassic Octopus?

Bouncing from link to link, I first saw this at Tam's place (top one) as a link to Atomic Nerds.  The zeitgeist is to make references to Cthulhu.  For example, Tam said,


Apparently mankind has a Cthulhu-shaped hole in its heart, for if Cthulhu didn't exist, it would be necessary to invent him.

I think it's way cooler without invoking pulp-fiction mythology. 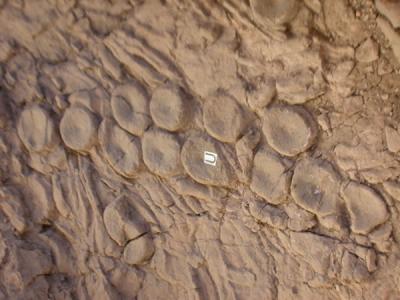 Pictured above is a fossil  bed in Nevada.  The round structures are the vertebrae of ichthyosaurs of the species Shonisaurus popularis. But vertebrae don't lie around like that. In a single animal, they're (obviously) pretty much in a line.  And if two animals died and piled on top of each other, it doesn't seem likely the vertebrae would be aligned so nicely, fairly well matched by size.  So how did they get there?


First of all, the different degrees of etching on the bones suggested that the shonisaurs were not all killed and buried at the same time. It also looked like the bones had been purposefully rearranged. That it got him thinking about a particular modern predator that is known for just this sort of intelligent manipulation of bones.

"Modern octopus will do this," McMenamin said. What if there was an ancient, very large sort of octopus, like the kraken of mythology. "I think that these things were captured by the kraken and taken to the midden and the cephalopod would take them apart."

In the fossil bed, some of the shonisaur vertebral disks are arranged in curious linear patterns with almost geometric regularity, McMenamin explained.The proposed Triassic kraken, which could have been the most intelligent invertebrate ever, arranged the vertebral discs in double line patterns, with individual pieces nesting in a fitted fashion as if they were part of a puzzle.

Even more creepy: The arranged vertebrae resemble the pattern of sucker discs on a cephalopod tentacle, with each vertebra strongly resembling a coleoid sucker. In other words, the vertebral disc "pavement" seen at the state park may represent the earliest known self portrait.

The thought that there was a giant prehistoric octopus, big enough to take down a dinosaur the size of a bus, and that this octopus was intelligent enough to arrange the bones of its ex-dinner into a pattern that looked like itself - a self-portrait of sorts - is so cool it fills me with awe.  Reality is way cooler than comparing it to a mythical creature.

By the way, since Tam has linked to me a few times in the last few months, this is a squid pro quo.