Concerned American, over at Western Rifle Shooters Association has a saying you may have heard before, "there's going to be a fight; let's win".  I want to echo that sentiment and say "there's going to be an economic collapse; let's survive and rebuild".  Let's not just survive like bugs under a rock; let's thrive.

While we can't really predict how bad it will be here in the states after the collapse, we have insights from around the world from people who have been through SHTF events.  In the last couple of days, Survivalblog had a link to a Bosnian doctor's posts on the SurvivalistBoards.com.  They are excellent, sobering reading about surviving through the Bosnian civil war.  Of course, I have referred to Ferfal's Surviving in Argentina blog many times, for his reports on life after an economic collapse.

What both of these guys have in common is the experience that trade will exist, and in addition to preparing in the normal sense (food, water, ammo, etc.: the four B's or Robert Kiyosaki's five G's) we should specifically include items that are likely to be useful for trade: whiskey, cigarettes, and even chocolates.  Selco (the Bosnian survivor) says get some even if you don't smoke or drink and don't worry about the brand.  Someone desperate for a cigarette or a drink will always trade for it. He also said he would prefer ammo and Bic lighters (to trade) over more toilet paper because TP takes a lot of room.  He also said you can shoot a pigeon, but you can't shoot a bottle of hand sanitizer.

It's easy to overlook the trade value of skills; you can trade your ability to fix something for your neighbor in exchange for food or other essentials.  If you don't know how to fix most of what can go wrong with your house and your stuff, especially your guns, this is the time to rush into learning as much as you can.  If you don't have woodworking and basic metalworking tools, but you have the 5 G's covered, now is the time.  I'm not going to blow smoke up your ass - it can be expensive to get quality tools and start from nothing.  I think it might be more expensive to not have those skills, because then you are really going to need to get out of your safe place and trade.

In my view, the things to prepare for include fixing just about anything made of (probably) cheap steels or aluminum, or fabricating replacement parts from raw metal stock.  I doubt you'll encounter titanium or exotic alloys.  The most common non-ferrous metals you'll work with are probably aluminum alloys and brass; the most common iron alloys would be mild steels or cast iron.  Cast iron is rough on cutting tools because it's common to find sand from the casting molds embedded in the metal.

In the coming days (or more - depending on events), I want to address some of the tools and things I believe are worth considering. 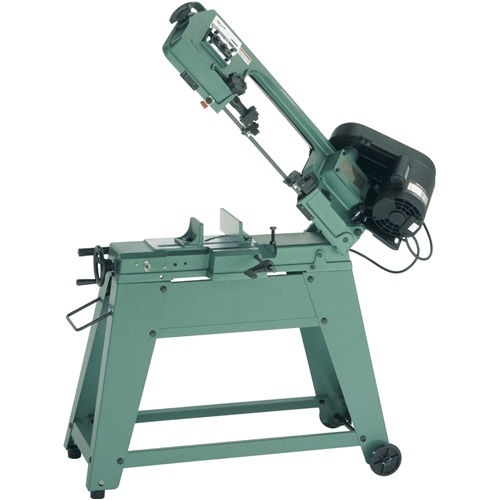 The ubiquitous 4"x 6" bandsaw, available from many sellers (this one from Grizzly).  With a good blade, these will rough cut anything from plastics to titanium.
Posted by SiGraybeard at 10:02 PM