Last night, my inner self slapped me upside the head and said this is open source civil war.  I guess I'm kind of slow - they keep talking about the "Arab spring" and the overthrow of Mubarek was nothing if not the first such civil war.  As it turns out, Robb over at Global Guerrillas seems to be with me on this.  This whole page is full of articles on it, including "letters from the front".

In the interviews and research I've seen, you have anarchists and communists protesting together.  What on Earth do they have in common?  Much like the Muslim Brotherhood took over after the Egyptian government collapsed, if they succeed in collapsing our system, the communists will simply execute everyone else.  It's not like mass murder is a new thing for them.  But in an open source civil war, if your enemy brings troops that help you overthrow the system, maybe they don't need killin' just yet... 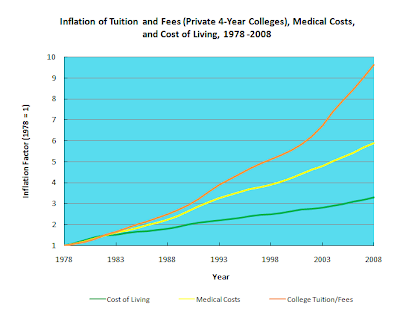 Why does everyone complain about the cost of medical services, which have gone up at around twice the rate of inflation (in this chart), yet you never hear a word about how education has gone up over 3x inflation?  (chart from my posting here)

Today's fun fact:  Harvard has an endowment worth $32 billion.  If they paid all 6700 undergraduates' tuition, fees and books, it would cost 1/1000 of that - $32 million.  That endowment grew over 21% last year.  Based simply on that, they could pay all undergrad fees forever, without endangering a single new building.  Don't get me wrong - I think it's good for students to figure out how to solve the problem of paying for college.  I went to school part time while working full time.  But the major institutions can fix this tuition/loan thing all by themselves.

Glenn Beck has long pointed out that past communist takeovers have been implemented by a "bottom up, top down, inside out" strategy.  It only helps his argument that noted communist and Obama insider Van Jones has said that in exactly the same words.  The idea is the pace and disturbances of things like OWS (the bottom rising) get so high, and disruptions become so annoying that the people demand the government "do something".  Government is only too happy to clamp down (top down) and do things to restore order.  Harsh restrictions.  Elimination of rights.  Maybe cancellation of elections "until the crisis is over".

Anti-big government groups should mind the old advice for dogs: be careful who you lay down with.  You might get fleas.  Or worse.
Posted by SiGraybeard at 9:15 PM