As Long as We're Dispelling FUD


Every time I eat a bag of potato chips I think of Fukushima. This 12-ounce bag of chips has 3500 picoCuries of gamma radiation in it, and the number of bags I eat a year gives me a dose as high as what I would receive living in much of the evacuated zones around Fukushima. But unlike the Fukushima refugees, I get to stay in my home. We live in a nuanced world of degree. Eating a scoop of ice cream is fine, eating a gallon at one time is bad. Jumping off a chair is no big deal; jumping off a cliff is really stupid. The numbers matter. It’s the dose that makes the poison. There is a threshold to everything.

The radiation in those potato chips isn’t going to kill me. Likewise, no one is going to die from Fukushima radiation. Cancer rates are not going to increase in Japan. The disaster wasn’t hidden like the Soviets did, so that people unknowingly ate iodine-131 for two months before it decayed away to nothing. No one threw workers into the fire like lemmings because they didn’t know what to do.

Although it might not be very accurate, since it came out kind of early, compare the radiation doses in this graphic from XKCD.  Fukushima was not another Chernobyl - by a long margin. 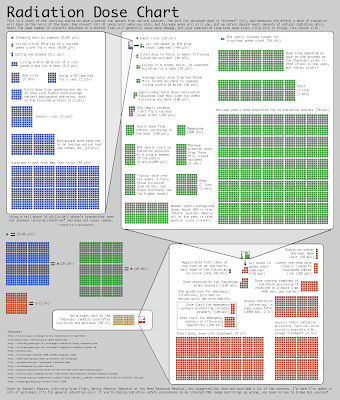