The Federal Power Grab - Trying to Keep Up 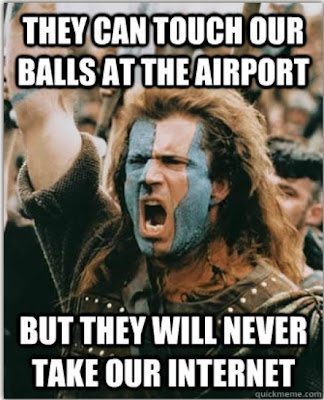 If it's true that the motto of internet users is "they can touch my balls, they can feel up my wife and daughter, but they better keep their damned filthy hands off my Internet", maybe this will trigger some small portion of the outrage SOPA/PIPA generated.  The US fed.gov has decided they can shut down any .com domain anywhere in the world. According to Wired magazine (that link):


When U.S. authorities shuttered sports-wagering site Bodog.com last week, it raised eyebrows across the net because the domain name was registered with a Canadian company, ostensibly putting it beyond the reach of the U.S. government. Working around that, the feds went directly to VeriSign, a U.S.-based internet backbone company that has the contract to manage the coveted .com and other “generic” top-level domains.

The feds' argument is that since the .com domains are controlled by VeriSign, which is a US company, and were granted a monopoly by the feds as internet registrar, the US has the right to shut down any domain ending in .com whenever they choose.


Furthermore, it says it has the right to seize any .com, .net and .org domain name because the companies that have the contracts to administer them are based on United States soil, according to Nicole Navas, an Immigration and Customs Enforcement spokeswoman.

Advise to any company spokes-types who happen across this: you might want to consider a different domain.

All the discussion of Sandra Fluke and "slut-gate" has controlled the narrative and shifted it into contraception and "women's health issues" instead of the first amendment.  So Ms. Fluke (I keep hearing it pronounced "fluck"; rhymes with...) did her job as the faithful leftie foot soldier she is and got the media and public distracted.   Meanwhile, it's worse than you think.  Newly-appointed Cardinal Dolan was asked to the White House to discuss the situation.  He was told to shut up and accept what the government tells him to do.  In the Cardinal's own words:


At a recent meeting between staff of the bishops’ conference and the White House staff, our staff members asked directly whether the broader concerns of religious freedom—that is, revisiting the straight-jacketing mandates, or broadening the maligned exemption—are all off the table. They were informed that they are.  So much for “working out the wrinkles.”  Instead, they advised the bishops’ conference that we should listen to the “enlightened” voices of accommodation, such as the recent, hardly surprising yet terribly unfortunate editorial in America.  The White House seems to think we bishops simply do not know or understand Catholic teaching and so, taking a cue from its own definition of religious freedom, now has nominated its own handpicked official Catholic teachers.  [emphasis added - GB]

Cardinal Dolan's letter is here in pdf form  He says the administration told him it's a done deal, the church needs to get over it and just "work out the wrinkles".  Secretary of HHS Sebellius even offered the absurd argument that “Religious insurance companies don’t really design the plans they sell based on their own religious tenets.” Srsly?  When was the last time you were involved in those plans, Skippy?

As I frequently say, don't worry - it's not that bad; it's much worse.  The Obama administration has argued that it has the right to tell churches who they can hire as pastor/teachers.


Acting Deputy Solicitor General Leondra Kruger told the court, during oral arguments, that the federal government should be able to trump the church on these decisions.

"Their submission is that the hiring and firing decisions with respect to parochial school teachers and with respect to priests is categorically off limits," said Kruger. "And we think that that is a rule that is insufficiently attentive to the relative public and private interests at stake, interests that this court has repeatedly recognized are important in determining freedom of association claims."

Did you know this made the Supreme Court?   The story is in the context of a woman who developed narcolepsy and couldn't do her job, but when has fed.gov ever held to narrow interpretations of law?  There's a story that even Justice Kagan looked at the Solicitor General and said something like "You can't possibly be making that argument, can you?"

Trying to keep up with the attacks on our liberty is a full time job for an army.
Posted by SiGraybeard at 9:24 PM