We had planned to go to the rifle range today - when we went to bed, the forecast called for cloudy and breezy with a "30% chance of rain after 11AM".  When the crazy cat woke me for breakfast at 6:30, I could hear the rain dripping off the roof.  When I got out of bed for good, it was really raining hard.  We need the inch of rain we got, but I could use some range time.  It has rained virtually all day.

Given some unexpected free time, I did a little 3D cad of what I want my solar panel system to look like.  Crude  and lacking in details, but in overview, it will look like this: 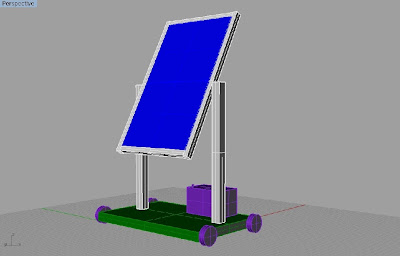 Turns out I have a battery that might do well with the proposed solar panel system.  It's a 33AH AGM deep cycle battery that I've had for a number of years.  Old batteries, of course, don't last forever and lose their ability to deliver high currents.  Now that I have a smart charger (runs on AC power) I thought I'd check it out more closely. 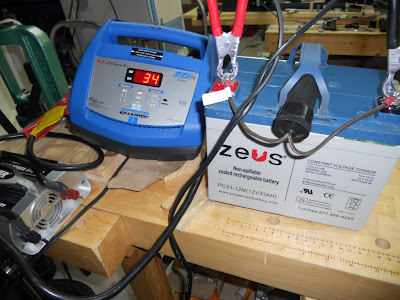 The charger would say it charged, but unless you can measure the current it delivers, you aren't sure of its real capacity.  I don't have a metered electronic load that I could set up to draw high currents, so how can I know if it really will deliver 33 AH?  Today it hit me that I could use an inverter and 100W lamp with it to see how long it runs.  A 100W bulb draws (100/120) or 0.833 Amp at 120V.  Just scaling that to 12V is 8.33 Amps, and allowing for 80% efficiency in the inverter (wild-ass guess) is 10.4A out of the battery.  By the way, I was not using the little cigarette lighter with lamp cord on the battery; I was using a set of jumper style cables salvaged from an old broken jump starter box, which you can see attached to the inverter (bottom left - silver and black box).  The lamp ran for over an hour and a half but less than two hours.  The "34" displayed on the charger is the percent recharged when I took the picture.

Today, I found the manufacturer's datasheet for the battery.  DrJim, Quizikle and the other engineers who drop by here will probably understand how I almost let out an audible squee when I found it.  According to the datasheet, a constant current discharge at 10.4A (naturally not on the datasheet) can be interpolated to be around 2 1/2 - 3 hours (probably not as much as 3).  It didn't make it, but I haven't been very nice to this battery and have almost thrown it out before.  Often, old lead-acid batteries can be revived by charge cycles.  We'll see.

Finally, from the "don't ask me how I know" file, if you need to gather water and you don't have a plastic barrel don't forget canvas.  Canvas can make a pretty effective water barrier to line something with.  It will hold water indefinitely.