The Least You Should Know About Electricity - DC

The simplest way to describe electricity is the motion of electrons, those carriers of negative charge in an atom.  We could spend a day discussing what an electron is, so let's not; let's just say it's a negative charge.  Direct current is electricity that flows in one direction, so that the individual electrons leave one terminal (usually of a battery or circuit that emulates one), go through the wires and other parts, and eventually arrive at the other terminal.  In a battery powered circuit, the electrons actually leave from the negative terminal and end up in the positive terminal.  This is backwards from the way most people think, but it doesn't really matter.  To remove a lot of negative signs, we define conventional current as flowing from the positive to the negative terminal in a DC circuit.  In an AC circuit, the electrons don't have to go around the circuit, they just wiggle back and forth.  Of the two, AC is the much more useful form of electricity for a variety of reasons.  Varying the frequency at which the electrons wiggle gives us every form of radio, TV, and the entire electromagnetic spectrum.  In what follows, I'm going to introduce the fundamentals of DC, then AC.  The same concepts apply, there are just important differences between them.

We've all heard of voltage and “high voltage”; fewer people are familiar with current and resistance but these are the fundamental characteristics of a circuit.  Every electrician, and everybody who works on or services appliances, or electronics knows about these things.  And, by the way, if you want to get your ham radio license, this theory is needed for the license if you really want to understand things.

Voltage, or potential, is a force available that causes electrons to move.  The current is the amount of electrons that flow past a point in a given time.  The unit of current, the Ampere, or simply “Amp”, is a set number of electrons flowing past a point in one second.  (The number is one coulomb per second, and a coulomb of charge is 6.241×10^18 electrons.  That scientific notation number is 6.241 quintillion, 6,241,000,000,000,000,000, a number even larger than the rolled up value of all the CDOs and other imaginary assets the banking system generated before the '08 crash.  But not by much, only by a factor of about 1000.  You will never need to know this, it's just a fun number.)

The most fundamental relationship in all of electricity and electronics is Ohm's law, which combines voltage and current with a new property called resistance.  Resistance (R) is opposition to current flow, and is the voltage (V) in a circuit divided by the current (I) going through it.  I find formulas with multiplication easier to remember than division so I remember it as
V=I*R
which says that the voltage change across a resistor is the current times the resistance.  The units of resistance are ohms, like the law; I've already talked about volts and amps, the units for the other two.  Ohms are often indicated by the Greek symbol omega, which this editor doesn't even have a symbol for.   If you search online for help on Ohm's law you will find much of it refers to Voltage as E – for electromotive force.  This is an old term that seems to only be used by beginners, but since beginners are the folks who will look for the explanations, that's the term a lot of the web sites use.

While we think of high voltage as dangerous (and it is...) the reason is that a higher voltage can force a larger current through a resistor (like you, for instance).  How much current is dangerous?  As little as .06 Amp (60 milliamps) of AC at the power line frequency can kill if it goes through the heart.  For DC, the number is somewhat higher, about 300 to 500 mA, if current passes through the heart to complete the circuit.  You can see that if you work on electrical systems, and your body represents some fixed resistance, a 440V system (say) will generate higher currents than a 12V system.  I have heard tales of as little as 20 mA and 32V being fatal and I know everyone at my company who works on anything above 50V requires special electrical safety training.

A very common illustration is a water tank and pipe.  The tank applies pressure, the potential, and the size of the pipe limits how much water can flow.  That's the current.  The size of the pipe that limits the amount of current the tank can deliver is the resistance.

The power (stated in Watts) in a DC circuit is simply voltage times current in amps:
P=V*I

Since voltage and current can be expressed in terms of resistance, you can substitute those equations into this one and get power dissipated in a resistor, expressed as the current in the resistor or the voltage across it. Your "power company" doesn't really sell you power, they sell you energy.  The metric unit for energy is a Joule, and a Watt is a Joule/second ( "Watt's a Joule per second?  Yes!") so a Joule is a Watt*Second and the power company sells you multiples of that, usually kilowatt hours (1000 watts for a 3600 seconds).

Confusing?  You'll find many, many versions of this chart online, which gives you a group of formulas to use, without doing the multiplication on paper or in your head (this one from http://www.radioelectronicschool.net/index.php?cmd=supplementary ) :

So what happens if you have more than one resistor in a circuit?  That depends on how they're connected.  If they are in series, “end to end”, the current has to go through them all one after another, and the total resistance simply adds them up:
Rtotal = R1 + R2 +R3+... 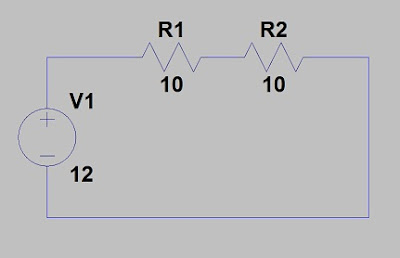 In this circuit, the two 10 ohm resistors would add up to 20 ohms. The left side of “R1” has the battery positive voltage connected to it, and the right side of “R2” has zero on it – it's connected to the negative terminal.  The only unknown voltage is the one in the middle of the two resistors, and with equal resistors, it's half the applied voltage. We'll talk about voltage dividers in another post.

If the resistors are in parallel, the current divides between them proportional to the size of the resistors.  They add in a peculiar way, as the reciprocal of reciprocals:
Rtotal =1/(1/R1+1/R2+1/R3+...)

In the special case where there are two resistors:
1/(1/R1+1/R2) = (R1*R2)/(R1+R2)
With a modern scientific calculator, you might find either one just as easy to enter, and remembering only one form will help.  I tend to use the reciprocal of reciprocals form because I tend to do this for several resistors more often than just two.

The easiest case is two identical resistors, and here the total works out to be ½ of the resistor value.  It is always true (and worth remembering) that the resistance in a group of parallel resistors is always smaller than the smallest resistor in the combination. 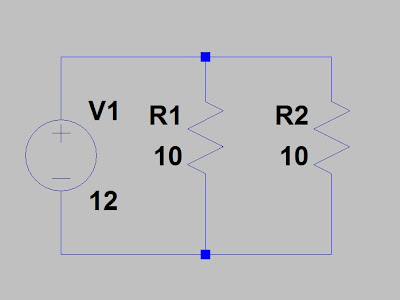 There are some other things to see in the example circuits.  Voltage is always measured across something: for example, the battery has a positive and negative lead and the voltmeter leads go one to each side.  I could put one lead on the junction of the two series resistors and the other lead on the other end of either resistor and measure the voltage across it; one direction will be positive voltage, the other negative (if I don't move the probe on the center).  Current always goes through something; I can't measure the current in R1, for example, without opening the wire between the resistor and either the top or bottom of the voltage source.  So voltage is always measured in parallel, while a current is always measured in series.  There's an exception to the breaking the wire thing: there are meters that clamp on and measure current by the magnetism it produces (yes, all electric current causes a magnetic field – it's the law).

OK, so why is this worth knowing?  In a circuit like our solar panel project, all of the losses add up like resistors.  If we have a wire with some amount of loss, we can cut the loss in half by running an identical wire in parallel with it (which is the same as doubling the cross sectional area of the wire).  If we add connectors, or other pieces of wire in series with the panel terminals, we've added series resistances and the total loss goes up.

If you take an electrical engineering circuits class, you'll get a lot more information, like Ohms' first name (Joe Bob), Ampere's first name (also Joe Bob), and other trivia, but not much more content.  You'll solve a billion and six problems with different connection configurations – some of which are useful for concepts introduced later in the curriculum, but this is the meat of DC circuits.

(Strangely, everyone in the history of electricity was named Joe Bob).

Readers:  I need feedback on wether or not this is any good.  I glossed over a lot of material that people might not be comfortable with: SI prefixes like kilo, milli and such; what those squiggly things are, the whole "what's a schematic diagram" thing.  Discomfort with Math.  That sort of thing.  I need feedback on how much more detail I need to add.
Posted by SiGraybeard at 9:18 PM