Today, a little detour from our usual topics into weather and radar.

The terrible tornado outbreak that hit Indiana and Kentucky yesterday snapped me to the realization that the worst weather season of the year has opened. The Midwest is home to not only more tornadoes but more severe tornadoes than the rest of the US, and the US is often said to have the worst tornadoes in the world.  The unique geography of the Gulf of Mexico to the south for the source of energy: the Canadian tundra to the north for a heat sink, and a thousand miles of relatively flat grassland in between is just not duplicated anywhere else.  It produces prime country for tornado development.  Tornadoes happen almost everywhere, but nowhere with the intensity as the ones found in the US heartland.  Most of the research in tornadoes is into how to predict them farther in advance in time and save lives, even if the property damage can't be prevented. 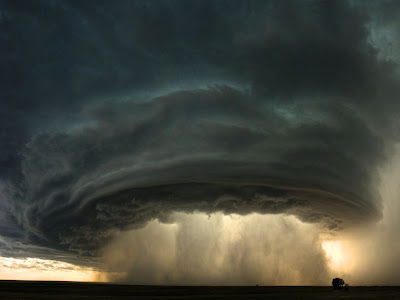 One of the most stunning pictures of a thunderstorm supercell - the place where most tornadoes are born.  National Geographic and Sean Heavey.

For about the last year, I've been working in the design of weather radar receivers.  I've been interested in weather all my life, but had somehow never gotten involved with weather radar design.  One of the things that makes weather radar challenging is that while you could go buy and read hundreds of books on radar design, virtually all of them consider weather as an annoyance you want to ignore, and get rid of during signal processing. Most users want to use radar to see through the weather - to see that radio tower to fly around, that harbor entrance through the fog, or that enemy fighter coming in.  The reflections from a cubic mile of rain are very, very different than the reflections from a small metallic object; they are different strengths, they get weaker at different rates and they tell vastly different stories.

The most recent radar used by the NOAA (National Weather Service) is their WSR-88D Doppler radar, which transmits sets of long pulses (1.5 or 4.5 microseconds long) with a center frequency near 3000 MHz (3.0 GHz).  Images from this radar are the ones you see most often on news reports or on the 'net and have seen for the longest time: the 88 in the model is the year it was implemented nationwide.  Here in the Silicon Swamp, we had one of the first in the nation since we're in a position to see into storms over Orlando - one of the busiest airports in the US, and the center of the most active thunderstorm belt in North America.  Airborne radars tend to operate at a higher frequency/shorter wavelength around 10 GHz.

I tell you that for an important reason: radars don't see all things equally.  What they are absolutely best at seeing is wet ice that's about 1/4 wavelength in diameter.  That means the WSR-88D sees storms with larger raindrops better than smaller raindrops and the aircraft radars see the smaller raindrops better than the ones the WSR is best at.  We all know that it gets colder as you go up in altitude, and because of that, the reflectivity changes as you go up in the storm.  At the lower altitudes a storm is all rain and rather reflective.  As you go higher, you hit a freezing zone where ice pellets falling from higher in the storm start to melt.  Perhaps they cycle in an updraft, freezing and melting over and over before falling.  This area has the highest reflectivity, and is often called the bright band or bright zone.  As you proceed higher, the storm turns entirely into ice and snow and radar reflectivity drops sharply. The thing is, every ground based radar sees this profile of storms as they get farther away.  Due to the known curvature of the earth, the radar beam, traveling in straight lines out and back, intersects storms at progressively higher levels.  Strong storms look weaker the farther away they are.

Imagine you wanted to make the faraway storm look like it does at its most intense levels - which are below where your radar can measure.   You could compensate for seeing a weaker part of the storm by adding strength to the reflections from farther away to make them look more like they would if the radar hit them at a lower level, but how do you know how much to add?  Is the fall off in return strength vs. height constant, so that we know how much strength to add by knowing its distance from the radar?  Do they behave the same way in the US' tornado alley, as in, say, the middle of the Pacific ocean?

The only way to know is to go out into hundreds of storms and see if they all behave the same way, and weather radar is a very empirical field.  We collect tons of data of varying conditions and test the data against many algorithms and ways of presenting the information.

The "Doppler" in WSR-88 and your local TV station's "Super Doppler 9000 Mega/Giga" radars, means that motion along the line from the observer to the storm can be detected.  The Doppler shift is measured by the motion of those big, wet drops in the wind.  Tornadoes can be predicted by big wind changes in very small areas: high speed winds approaching the observer very close to high speed winds receding from the observer.   The most dramatic features look like hooks, where the wind directions shift dramatically over small distances and wrap around each other. 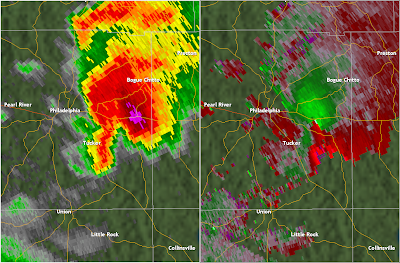 NOAA radar (WSR-88D) showing thunderstorm intensity (left) and doppler velocity fields (right) - note the hook where the red wraps around the green.  That's where the tornado is.

A unique feature that aircraft weather radars need to detect is wind shear.  The down draft of wind from a thunderstorm can cause winds that can bring down an airplane if the pilot isn't aware that they're there.  A down burst that occurs in front of a plane during descent into landing is deadly because the wind blowing toward the plane makes it speed up, and climb above the intended glide slope.  The instinctive reaction of the pilot is to slow down and give up some altitude.  Moments later, when they punch through the headwinds into tailwinds, the plane now drops due to lack of speed.  If there's not enough altitude, well, they always say to avoid edges while flying, and the edge of the air is the most important one to avoid. 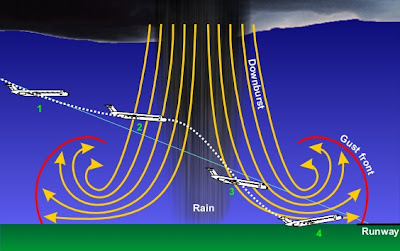 (source)
The problem with wind shear is that there is usually no rain involved.  The returns from scattered rain are weak, and usually accompanied by weak returns from grass, dust and even bugs and other junk.  Mixed in with that are strong reflections from things also along the path like cars, trucks, buildings, radio towers, landing lights, all sorts of things you don't want to see.  How we see what we're looking for is going to have to remain our little secret.

The best way to know if you can detect these events properly is to go find them and fly into them taking data.  Yes, it's dangerous.  But the best way to develop a product that gets us all safely to our destinations around storms is to go find the worst weather to fly into and test the radars.  This is our test flight season.
Posted by SiGraybeard at 8:34 PM