Interesting Day on the Range

Yesterday, that is.  Before writing that long post on the nature of truth - and how to know it when you come across it - Mrs. Graybeard and I got down to our local club range for a little fun.  I put a new stock on my Remington 700 an embarrassingly long time ago, and hadn't even tried it out.  Considering the developing ammo situation*, we brought our .22 rifles for the bulk of the shooting. The 200 yard range was in use for a match (D'oh!!) so we went to the 50 yard range that has a few less seats and less room for really setting up your bench rest.

The Remmy was excellent, although the new stock seemed to have (perhaps) moved the POI quite a bit.  At 50 yards, it had moved over 3".  Here's my first four rounds in a weird shot from my iPhone that actually focused on the dirt behind the target, leaving the important stuff blurry.  : 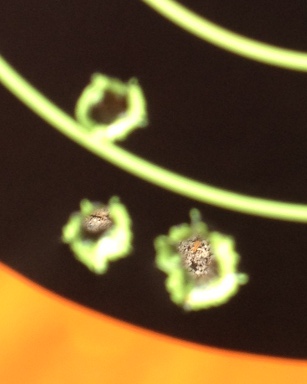 The first shot is the upper one.  Shot two the one below that, and shots three/four the elongated hole next to two.  Those are .30-06 holes, so the actual diameter for the two single holes is at least .30".  It was pretty easy to move the POI with the adjustments on the scope to get into the X ring.  For the terminally curious, I put one of the "Bobby Hart AccuBlock Heritage Classic" laminated wood stocks on it, in "brandy".  The actual installation was "drop in" with no messing around required. Mrs. Graybeard only shot a few rounds, but put them all in about a 1 to 1 1/2" line (just guessing - based on memory).

The interesting (read that weird) problem was with our .22s.  These are the Savage 64F rifles we got about 18 months ago and brought to Appleseed, so we know they're good and they were pretty well zeroed last time we used them.  Mrs. Graybeard fired at the target and said, "I don't see any holes?"  Ran a magazine of 10 and still said she couldn't see impact holes.  Sure enough, nothing visible on the target.  Shortening the story somewhat, with either rifle we couldn't put a .22 in a target until I tried to shoot above the top of a vertical stack of 2 (these are 8 1/2 x 11 Caldwell targets).  Then a hole showed up about 25" below where I was aiming.  At 50 yards, with a rifle that had been zeroed on that exact range?  Both rifles POI was over two feet below the POA and I had to crank the adjustments like crazy.  They had not been handled roughly - and had just been sitting in a closet, in an air conditioned room since the last time we had them out.  One of them hit right of centerline and the other hit left of centerline.

I find this amazingly bizarre.  Tasco scopes.  Something clearly moved around.  Either the internals of the scope or the mounting rings on the rifles' "rail" moved.  Good thing I didn't need to use it to induce a migraine in some zombie!  Anybody seen this?  Any ideas on how to keep it from happening again?

*"developing ammo situation" see here...  about two weeks ago, I got an offer from Cabela's for $2 shipping on any order over $50.  That seemed like a good time to check for ammo deals.  Not one of the calibers I was looking for was in stock.  Zero, zip, nada, zilch.  There was high dollar ammo - JHP SD rounds and such.  Just no range ammo.
Posted by SiGraybeard at 3:38 PM