This Is Your Captain Freaking

Apparently the New York Post is responsible for that great headline, so credit where due and all. 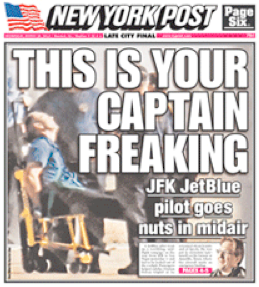 Of course, the media is all over the story of the JetBlue pilot who lost it on a flight this weekend, and the inevitable "are we careful enough selecting pilots?" stories have begun.  I expect the next thread will be "what if he was one of those armed pilots!!!???"  The best angle on this story doesn't seem to have made the news, though.  Aviation source AvWeb reports:


By then a flight attendant was on the microphone asking for help to subdue the aircraft commander and there was no shortage of volunteers. Many of those on board were on their way to the International Security Conference in Vegas. Former prison guard David Gonzales wasted little time bringing the situation under control.

So the pilot freaks on plane full of guys going to the ISC West International Security Conference?  Picked a bad group to do that with.

Reminds me of the great Glock commercial with "Gunny" - R. Lee Ermey:

H/T to a long-time friend.
Posted by SiGraybeard at 8:04 PM