Lead acid batteries are the backbone of the rechargeable battery world, literally sold by the ton.  The chemistry is one of the first marketed, and the design has been refined for at least a hundred years - some backup information here.  People have been predicting the demise of lead acid batteries for years (example) but the engineers who make them continually improve them. This article emphasizes the shortcomings of the lead acid technology for a lot of the electric car and other "latest fad" applications.

One of the things that puzzled me when I first came across the design of the cell was how both cathode and anode are lead.  In most electrochemical cells, there are dissimilar materials: I'm sure you've seen NiCad, or Nickle/Cadmium, for example.  Zinc/carbon (the most common batteries in your local store), zinc/manganese dioxide ("alkaline" batteries) and silver/zinc are other common chemistries.  One side is positive the other negative; in lead acid batteries, both sides are lead.

The new design is more like those familiar systems: lead-carbon, (PbC or Pb-C) where the carbon becomes the negative plate.  It appears that there are two main companies in this arena, Firefly Energy and Axion Power.  This is new technology, not widely available, yet, but the story is old-fashioned "smart guy has a better idea, gets venture capital" stuff, the way it's supposed to be.  No big DoE grants here (that I can tell, anyway).  From a trade newspaper's comments


"The firefly battery uses a rigid carbon foam to replace the lead grid. It's my understanding that the carbon foam is then pasted with the same sponge lead that all other lead-acid batteries use. The use of a carbon foam current collector apparently adds some capacitance to the negative electrodes and helps reduce sulfation by breaking the paste into smaller morsels, but the gains are of the same magnitude as the gains manufacturers are getting from the addition of carbon to their pastes.

A pretty wise old graybeard I worked with when I was still in college said, "engineering is the art of compromise", meaning you always trade various things against each other.  There is rarely ever an ideal answer; just some compromises that work better than others in their intended place.  Axion Power, sums up some tradeoffs this way:


(emphasis and note added by SiGB)
Because the technology is new, I don't have a nifty little picture of what they look like inside.  The companies probably don't want any more info out than there is already. But here's what one looks like: 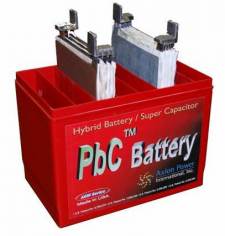 From the outside, Axion’s PbC looks much like its lead-acid predecessor. “We’ve just replaced a stack of lead electrodes with a stack of activated carbon electrodes,” Axion CEO Thomas Granville said. (The Economist and Green Car Congress both have done deep dives on Axion’s chemistry, but here’s the short version: Axion replaces the lead-based negative electrodes found in conventional lead-acid batteries with carbon assemblies.) “The only [noticeable] difference is the feel.” He said Axion’s PbC batteries weigh half as much as traditional lead-acid batteries, while offering just slightly less storage capacity.