CBO Says It's Over in 15 Years

Borepatch has an excellent video by Bill Whittle (does Whittle do any that aren't excellent?) on the sad truth of the economy.  The highlight of the video is an exchange between Paul Ryan and Treasury Secretary Elfin Geithner, and it includes something that has been talked about in the economatrix but not very widely.  Ryan says the Congressional Budget Office has said that unless the current spending plans are stopped, the US economy will collapse by 2027 - that's 15 years from now.  Geithner essentially says "we don't have a plan to fix it, we just don't like yours" to Paul Ryan, so the Secretary of the Treasury, the most powerful guy in the economy (at least, in the Fed.gov structure) is happy to do nothing to fix the structural problems; just kick the can and hope it doesn't all collapse.  Go watch. 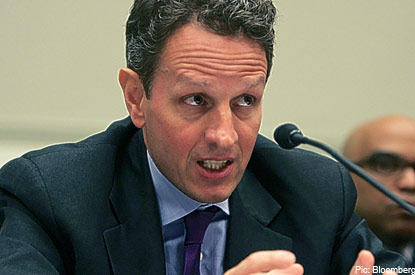 Silly linear thinking - we don't have anywhere near 15 years.  I can't give you an exact date, but how about if I said we have five years plus or minus five?  15 years is based on how the CBO thinks the world will unfold in the coming years.  But anyone who has ever worked on a big project in industry or government will tell you no complex program has ever followed its original schedule and it's a worn out military cliche that "no battle plan ever survived contact with the enemy".

The value of the CBO saying the country ceases to exist in any time frame is that the fact our country is headed for collapse is now out in the open.   Fifteen years isn't that long.  I've worked at my current job 16.  The Simpsons has been on the air for over 20 years.

Unfortunately, comments get taken over by a goober named Goober who wants to blame everything on "Boomers".  He spends paragraphs blaming it all on the Boomers and then has the gall to finish it up with:


When my generation has been in charge for the last 40 years, and God forbid we're still robbing from our kids for our retirement, I'll universally lambast MY generation, too. You have my word on that - I'm nothing if not fair.

What crappy defective thinking that is!  A favorite saying of mine goes, "you can't out think someone that isn't thinking" - it's not worth arguing with them.  Clarity of thought is something I try to emphasize here.

I wrote on this problem more recently than I thought, and it's widespread. To borrow a quote from that post, it fits here perfectly with very minor edits (just removing the poster's name):


Not to pick on him in particular, it's the idea. The idea that one generation is responsible for the mess we're in is a poisonous thought, and it's the kind of easy, "let's find a scapegoat" thought that can spread, especially if the SHTF and society collapses.  When people are desperate and hungry, they can whip themselves into a frenzy with ideas like that.

Farther down, about another "hate the boomers" example:


This writer, and I would assume many like her, believes the breakdown of the system is caused by her parents and grandparents, who made the mistake of believing the promises of politicians, much like union members who believed they could retire in their 50s and live on fat pensions paid for out of unicorn droppings.

Returning to the SHTF scenario,


The problem is, as I posted in reply, when the angry mob comes to "kill all the old boomers", they're not going to wait for you to show them how frugally you've lived, or that you pride yourself in not having taken handouts, or that you fought government expansion and the crippling debt with all you could.  It's going to be mob rule: kill or be killed. When you're pondering a polygonal war space or Matt Bracken's CW2 cube, this adds another complication, that the people you are helping - or fighting alongside - will be firing on you as soon as it's convenient.


It's way too simple to blame it on the old people. Or their parents. My engineer's perspective is that I don't care who screwed it up as much as what I can do to fix it. The only value of knowing who broke it is to keep them from sabotaging my repairs.