WRSA links to this post by Amity Shlaes on the parallels between what we see for 2013 and 1937 under FDR.  1937 was the Depression Within The Depression, part of the reason the US calls it The Great Depression and the rest of the world just thinks of it as The Depression. (Her home on the web)

I've read her book "The Forgotten Man", called the "finest history of the Great Depression ever written" by Steven Hayward of the American Enterprise Institute.  Naturally, Paul Krugman hates it because she presents evidence that FDR's policies didn't end the depression.  Amity is one of a few genuine experts on the Depression.  If she's talking about things in that period, I'm listening.

There's that whole theatrical song and dance going on in DC about the "Fiscal Cliff".  Not to say there's not going to be effects from it, but it currently appears to be all about politics.  I'm inclined to agree with the viewpoint that the administration would be perfectly happy to go over the cliff as long as they can get it all blamed on the Stupid party.  Think of it this way, they've arranged a no-lose scenario; if the Stupid party caves on tax increases, it's like George H.W. Bush's famous "read my lips" cave, "OK, we'll raise taxes now and come back later to cut spending" which never happened.  The ability to run on a promise to cut taxes gets severely compromised.  And if the Stupids don't cave and everything goes "over the cliff", the Evils first blame everything on the Stupids, then pass "Middle class tax reform" in the spring, with their solid majorities.  Win-win-win for the Evils. 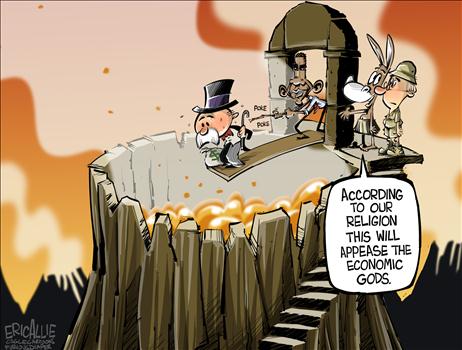 (Eric Allie at Townhall)
Taxes are going up, no matter who you are.  Obamacare is just getting started.

Back when that stupid story about "Warren Buffet pays less tax than his secretary" was in the news, I said,

DC to the rescue.  They not only didn't cut her taxes to the 15% dividend rate, they raised dividend taxes to 43% (for the top brackets - like Warren is in)!

It's so crazy, that the Bernank all but announces QE4 and nobody says anything about it!   Remember the announcement, just a few months ago, that they would buy $40 Billion in bonds per month, ad infinitum?  They increased that to $85 billion/month at today's meeting.  And nobody says a word...

At this point, it's impossible to know what the big picture will look like for next year.  I expect a more serious recession.  I only know one thing: I sure don't see any signs that we're moving in any directions to avert fiscal collapse.