Some Things Are Worth Holding Onto

I received an email today with a story, told in a simple series of pictures, that brought tears to my eyes.  After searching online for a while, I find most of the pictures here on BuzzFeed:  the story of Taylor Morris and Danielle Kelly.

Taylor is a young man from Cedar Falls, Iowa, who enlisted in the Navy.  Taylor is an EOD - Explosive Ordinance Disposal - officer.  On May 3, 2012 in Afghanistan, Taylor had a bad day, and you probably know that when EODs have a bad day, it can be a very bad day.  He lost portions of all four limbs.  Recovery, still ongoing, has been a long road.  Danielle has been there through it all. Go read.  More here. 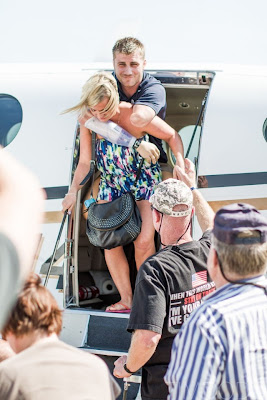 As the guy who sent me the pictures said, "If he's a hero, she's an ANGEL".  I suspect they would both reject those labels.  And I wouldn't believe they aren't for a nanosecond.