As we teeter toward the end of the year, it's an interesting time to look at some of the long term trends in finance and the big picture.  To go with what follows, I highly recommend you read "Preparing for the Long Rains" at According to Hoyt.  She does a great job of describing the way that everyone just sort of knows that bad times are coming.


And then periodically I get together with a friend, or sit down with an old acquaintance and I hear how much more seriously they’re preparing.  It’s all guns and canned food, and why am I still living in an urban area, have I gone nuts?  And don’t I realize it’s time to set aside the writing/publishing thing and worry about preparing to survive the collapse.

In The Silver Market Update, analyst Clive Maund looks at the performance of the silver market over several time scales, from the last several months, back through the beginning of the bull market around 2000.  Look at this chart (extrapolations in blue at the right end) 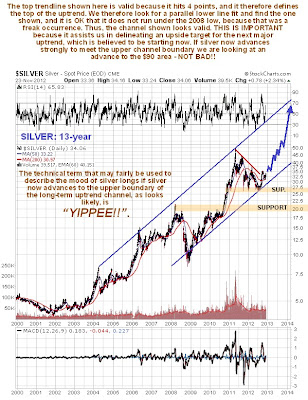 His lines show that the silver market has stayed in pretty linear channel since the crash of '08, and pretty closely since '04.  He points out the top of that channel is $90/oz by this time next year. Perhaps that's optimistic, it could end up at the bottom of that channel, too, but the mid point is around $70/oz, and even the bottom at $50 is a nice return on $32/oz silver today.  In any event, the upturn of the black line in the last few months is unmistakable, and could well be signalling that silver has resumed its upward price leg.

A personal observation is that the last couple of years, silver has been soft at the end of the calendar year, dropping a bit from prices in early December.  I'm not very good at hitting market lows, and how markets will react to the DC theatrics is impossible to predict.  Any day between now and the end of the year could be a good time to buy Silver.


HSBC says central banks created $9 trillion during the crisis, which is the equivalent to the value of all the gold that has ever been mined.

The Federal Reserve has become the biggest buyer of U.S. government debt.  It owns one dollar in six of the national debt, which is the largest percent of GDP in history.  And it’s not just the Fed... the major central banks are also busy creating money.

Clearly history is in the making and we don’t know how it’s all going to end.  It’s bigger than any presidential election, and all we can do is protect ourselves against the wild printing of money.

They believe gold is completing a bullish adjustment pattern and due to return to rising prices, too.  Zerohedge reported that the American Gold Eagle coins were selling at the highest rate since 1999 and going to "HNWs" - short for "the rich".

Let's see - I'll add in that the ASEAN group has essentially begun the post-dollar/post-USA world with the meeting in Phnom Penh in November - a meeting that treated Obama graciously and politely, but completely ignored him (as they would treat an insane uncle).

Oh, yeah, and since the election, the highest rank search term on Google has been "bulk ammo".

Interesting times we live in, no?