While web-wandering today, I came across an article by Professor of Economics, Walter E. Williams that puts the haggling over "taxing the rich" and "we just need them to pay their fare share" in perspective.  It was embedded in an interesting little piece, "The 20 Most Devastating Stats of 2012 in Quotes" by John Hawkins.

To set this up, two former congressman, Chris Cox and Bill Archer, have done an analysis that says,  “When the accrued expenses of the government’s entitlement programs are counted, it becomes clear that to collect enough tax revenue just to avoid going deeper into debt would require over $8 trillion in tax collections annually. That is the total of the average annual accrued liabilities of just the two largest entitlement programs, plus the annual cash deficit.”  I've often spoken of what they call the annual cash deficit of about $1.4 Trillion, but have never rolled up the costs of the major "unfunded liabilities".

Got that?  Now, let this quote sink in for a few seconds.  Make sure guns, knifes, and other possible implements of suicide or homicide are out of reach:


Washington would have to collect $8 trillion in tax revenue, not to pay off our national debt and have reserves against unfunded liabilities, but just to avoid accumulating more debt. Recent IRS data show that individuals earning $66,000 and more a year have a total adjusted gross income of $5.1 trillion. In 2011, corporate profit came to $1.6 trillion. That means if Congress simply confiscated the entire earnings of taxpayers earning more than $66,000 and all corporate profits, it wouldn’t be enough to cover the $8 trillion per year growth of U.S. liabilities. (emphasis added - SiG)

Now, people making $66,000/year are not "the rich" the progressives always talk about punishing; they're just above the bottom of the fourth quintile of income, so in the upper 40% of incomes 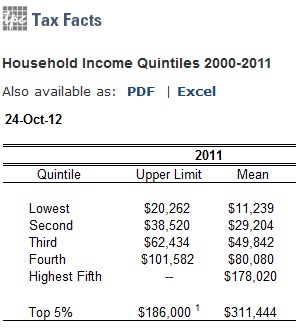 Likewise, Williams tells you just how long you could run the US based on complete confiscation of the income of various levels of "the rich".

The talks coming out of DC today focus on John Boehner's cave to Obama, "Plan B", which would increase revenues by $1 Trillion over 10 years.  The White House promptly rejected it, because it didn't punish the top 1% enough - it just raises taxes on those making over $1 Million per year.  It's just another sign that no one up there considers our debt as a real problem.

The talks about the Fiscal Cliff are meaningless.  Yes, they may well cause us more pain and a collapse into a deeper recession within this recession, but it doesn't change the bigger picture.  We are going down.