Preparing for the Fight

The details of Babs Feinstein's Assault Scary Looking Weapons Ban have been posted to her website, and it's simultaneously interesting and nauseating to look at them.  Essentially she intends to criminalize any semiautomatic rifle that can accept a magazine larger than 10 rounds, except for some .22 caliber rifles.  While I don't want to waste the space quoting her, it's clear that the flying monkeys staffers who prepared this have listened to some of the criticisms of the old AWB.  For example, it has often been pointed out that the wooden-stocked Ruger Ranch Rifle Mini-14 was acceptable while the functionally identical Mini-14 Tactical version was prohibited, so they responded by calling the Mini-14 out by name and declaring it illegal.  The NRA-ILA has extracted some highlights to include here:
Notice in particular that the definition of assault weapons is extended to pistols.  The conclusion here is that for any model pistol that comes from the factory with a magazine that holds over 10 rounds, and there must be a couple of dozen of such models, they become NFA firearms requiring a $200 tax per handgun - and, it's arguable, $200 per magazine - fingerprinting, photo ID, and permission from your local sheriff.

The only technology she appears willing to accept is bolt action rifles with built in magazines holding five or fewer rounds.  I suppose an M1 Garand with its 8 round en bloc clip would be acceptable.  And revolvers.  At least on her web page and the NRA web page, I see no talk about restricting revolvers.  Maybe modern engineers can do something with the old Belgian H.D.H. 20 shot revolver design? 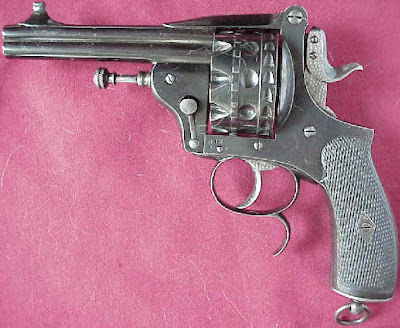 (HDH 20 Shot Revolver - 1895)
There's more.  On her web page, Feinstein lists studies to back up her efforts, and predictably lies about what they say.  For example, she says:


In a Department of Justice study (pdf), Jeffrey Roth and Christopher Koper find that the 1994 Assault Weapons Ban was responsible for a 6.7 percent decrease in total gun murders, holding all other factors equal. They write: “Assault weapons are disproportionately involved in murders with multiple victims, multiple wounds per victim, and police officers as victims.”

The NRA quotes the actual paper:


On her website, Feinstein claims that a study for the DOJ found that the 1994 ban resulted in a 6.7 percent decrease in murders. To the contrary, this is what the study said: “At best, the assault weapons ban can have only a limited effect on total gun murders, because the banned weapons and magazines were never involved in more than a modest fraction of all gun murders. Our best estimate is that the ban contributed to a 6.7 percent decrease in total gun murders between 1994 and 1995. . . . However, with only one year of post-ban data, we cannot rule out the possibility that this decrease reflects chance year-to-year variation rather than a true effect of the ban.  Nor can we rule out effects of other features of the 1994 Crime Act or a host of state and local initiatives that took place simultaneously.”

GunFacts (pdf - see page 63) gives more data to back up discussions with antis.

Realistically, this could be a negotiating ploy: put up the most outrageous demands she can think of and get what she can.  We need to convince our representatives not to accept anything.  None of these bans will have the desired effects.   Time to get busy contacting your congresscritters - and don't forget your local and state officials either.  The war is not coming, the war has begun.