This Month, I "Graduate"

Just over two years ago, by a week or two, the lovely and musically-more-trained-than-I Mrs. Graybeard was reading something - Survivalblog, I think - and turned to talk to me.  She told me about the article saying that after the collapse, life was going to be harder ("sure", I replied); we will work harder all day, and may well find ourselves with no TV or cable entertainment in the evenings ("I've thought of that").  Whomever was writing the piece brought up images of homes in the 1800s gathering around by candlelight to play a little music together, and said we will probably go back to that.  I replied something to the effect of "no problem; I know how to play guitar and we have one in the other room". Plus, she still has a flute and could pick that up.

I did have a guitar in the other room, but it turns out I only thought I knew how to play.

I think I've only written about this at any length once about 15 months ago.  I had learned to play casually as a kid.  I think I was 13.  Within a year I was playing in garage bands, like millions of other kids.  I played at it mostly through high school, eventually getting an El-cheapo electric guitar and playing with friends.  My favorite instrument, though, was classical guitar and I received one of those as a gift in my 9th grade year.  I had the instrument 8 or 10 years - until the late 1970s.  Strangely, I don't recall what happened to it, although I hadn't played it in years at that point.  In 1988, I got another one and started taking classical guitar lessons, although I dropped out after about six months.  That was the one in the closet.  So out it came, on went some new strings, and I started trying to remember things.

See, the funny part is that it had been longer since I played than all the years that I played put together.  To say I sucked is a vicious understatement.  The bigger issue was that I wanted the steel string sound, which the classical just won't give.  Shortening the story, I don't want to put you to sleep, by a little after Christmas two years ago, I had one of these: 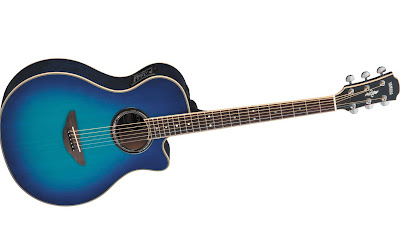 That's a Yamaha APX-700, acoustic electric - if you're not familiar with the term, they're fully playable either way.  Don't want to be stuck with an electric guitar if there's no power.  And as I pointed out in that prior article, within another few weeks, I had started on the Learn & Master Guitar DVD course.  And as the sidebar says, yeah, I've got a couple of instruments in the stable.

There are 20 lessons in L&M.  This month I'm doing the last lesson - I will finish in two years.  The lesson is on chord inversions and more advanced chords - if you know the instrument you know there are always more chords to learn.  Several lessons ago the course had changed from "let's make you a guitarist" to "now that you are a guitarist, here are some cool tricks that will help".  This lesson continues that.

So what does two years of DVD lessons get you?  Let me tell you, Walter Becker I ain't.  If he's more your speed, Slash I ain't.  Joe Walsh and Mark Knopfler have nothing to fear.  What I am is light years better than I was with about an encyclopedia's more knowledge than I had.  I went from playing pretty much only in the first position (that means my left hand out there on the far right end of the neck in this picture) to playing the entire neck.  I went from reading chord names to reading music, although not as well as I'd like.  It takes us, what? 8-10 years?, to read English really well, why should we think it would take a few months to read another language (music) just as well?  One of the longest units was to know every note on every fret on the neck, and I worked on that from the start of August until mid-November.  Can I sight read and play something like the riff from "Sweet Home Alabama" or "Hotel California"?  Not quickly, no.  I would muddle it out eventually.

What's next?  Well, I think it's just as reasonable a way to learn to study some songs individually and build up a repertoire.  I think that's next, alternating with some more study.  Music is one of those things you can learn relatively quickly but work on for the rest of your life, you know.

We now return you to your regular blog wandering...