But Everything is Fine!

Not told to me directly, but you hear it often enough.  "Why are you so down on the economy when everything is fine?  Housing prices have bottomed, and the DJIA is at 13,000, way higher than when Bush was in office, why do you think bad times are coming?" What do you say to someone like this?  They earnestly believe everything is fine.  Recovery is underway.  If we're concerned, it's just partisan politics.  Or raaaaaaacisssssmmmm.

All of the things they mention say this person doesn't really understand price inflation, or they think it's negligible, like the official stats say.  Let's start there.

You can ask them if they know what quantitative easing is, and if they know what it means.  Chances are they don't.  You can explain that the Federal Reserve is creating money out of thin air to buy up debt and keep interest rates down, and that they're currently creating $85 Billion per month - in addition to over a trillion already spent.  By having so many dollars available, an enormous supply keeps the price of money (interest rates) down by supply and demand.  You can explain that the federal government borrows about 40 cents of every dollar of Federal spending, and that we sell bonds to countries and banks that will buy them in order to finance that borrowing, promising to pay them their purchase price and some small amount of interest some time in the future.  Here's the first learning moment: ask them who's buying our bonds.  Chances are they'll say China, because that has been said on the news often enough that they'll have heard that, but in reality it's the Federal Reserve that is buying most of our debt, about 70%.  It's really an incredible wealth transfer from the people to the banks.  Now you can say that this is like paying your Visa with your Mastercard; maybe you can do that in the event of an emergency, but in the long run, it's not healthy.  Since the money is created by creating debt in a bank ledger, it's more like writing yourself a check to deposit so that you can write more checks.

Now you can probe: if the Fed is creating $85 Billion per month so that any demand for dollars is easily met, and interest rates kept down, does the large supply of dollars effect anything else?  Simply anyone who wants to sell you something knows that more dollars means each one is worth less, so they ask for more.  What's the real inflation rate?  The government has changed how they report it over the years, but everyone who goes grocery shopping knows prices are up.  John Williams over at Shadowstats makes a living keeping track of price inflation the way it was done before, making it easier to compare numbers over time.  Not surprisingly, he has discovered that the Federal government keeps changing the way inflation is reported to make them sound better.  Here's his latest plot.

Going back to the original argument that the Dow is up so high, if the DJIA is approximately 13,000 today, you can reduce that by 10% inflation to say it would be 11818 if there were no inflation.  This compounds like interest.  If there were no inflation for the last two years, the DJIA would be 107413.  You can continue.  The independent investor site "Dogs of the Dow" calculates that adjusted for inflation, the Dow has not gone up since about 2000 - Y2K.

Price inflation also affects the price of housing.  The inflation-adjusted prices for houses on the national level are just now returning to historical norms. But beware: politics is at play again, and there is thought that regulations have been created to inflate another housing bubble.  That can't end well.

A lot has been said about the Federal debt, but I think what drives it home the best is putting it into dollar values close to what people have experienced, or close to their income level.  This is easily done in a spreadsheet or with a calculator by scaling the enormous numbers involved.  Consider a family with this income and expenses ledger, derived by dividing the Federal budget numbers by 30,000,000 (and striving for nice, round numbers instead of absolute accuracy) :

This year they made $75,000 and spent $140,000.  They're already in debt $550,000, over 7 times their income, but instead of paying that down, they're adding $65,000 to their debt.  Who would loan this family money?  I can't imagine any bank agreeing to loan them more money without plans to get out of debt.  Does this look economically healthy?  That's where we are as a country. 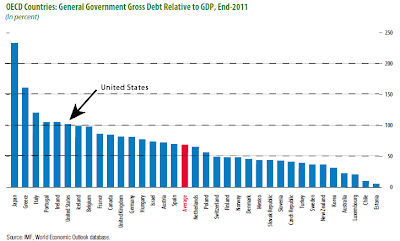 The thing to point out about this chart is to look at the countries to our left (higher debt to GDP).  Greece is collapsed as a country, Japan is barely afloat, while Italy, and Portugal are regularly reported as being in trouble.  Look to our right.  Iceland had troubles, France is in trouble, and Spain is being reported as the possible next domino to fall.  We're not in a good place.

That's why we're concerned about the economy.  We're not trying to make Washington - the president and/or congress look bad.  They're good enough at that themselves.