With major props to Gun Free Zone, this is too good not to share. 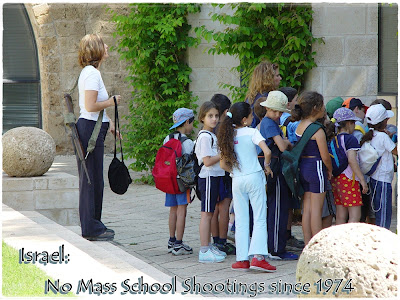 And Miguel also links to Massad Ayoob with an excellent piece, calling for just this.

The ruling class elites, almost 100% of them, are atheists.  Strongly anti-faith, anti-religion.  Because of this, the vast majority of them have a problem with the idea of evil and good really existing.  In their eyes, people aren't evil, they made "bad choices", or have "chemical imbalances".  That's why, for every call to fix the culture you'll hear this weekend, you'll hear a thousand saying to restrict guns, or standard capacity magazines.  For every reference to too much violence in movies and on TV, you'll hear a thousand screams against "gun violence".

There is no such thing as gun violence.  Guns are simple mechanisms incapable of violence.  Michael Bane talked about being in a meeting with major media people after another big shooting, and after listening to their prattling about "gun violence", he said (I'm probably butchering the quote):  "I pulled my gun out of my holster and put it on the table.  This was a fully loaded gun with one in the chamber.  Then I took a stick and tried to poke it enough to make it get mad and shoot someone.  You know, that thing never did."

With every school protected by armed staff, and vast numbers of citizens walking around with rifles, it's no wonder the Palestinians have essentially given up on trying mass shootings in Israel and gone over to suicide bombers and throwing unguided missiles.  Just like their approach to airline safety, we could use to model the Israeli approach to safety in a civil society.

Posted by SiGraybeard at 3:03 PM