Like all of you, I'm saddened almost to the point of sickness at the Newton, CT school shooting today.  At this distance, I can only offer prayers for strength and peace for the parents and families - and the responders who see things that must weigh heavily on anyone's heart and soul.

I have to say that Borepatch has probably summed up much of what I'm feeling and that I think most of us are.  Because along with sadness comes real, deep anger.  You should go read, but Borepatch is dispensing lots of anger at the "Look at me, I'm so sensitive" shows we're going to see in the next week.  For example, I'll lift one for here:


The Usual Suspects - I'm looking at you, Piers Morgan - are blathering idiocy about too many guns and the typical hand wringing.  This infuriates me, because it will do nothing to prevent this sort of thing in the future.  It's all preening - Look at me, I'm so sensitive.  Hey Piers Morgan, STFU if you're not going to do anything to prevent this in the future.  Just STFU.

I'm most angry at the shooters, of course.  All of these pathetic losers who think that because they're feeling pain, they have the right to commit such atrocities.

It's not like we don't have history on this.  There have been mass shootings attempted in places where people had guns and could fight back.  In those cases, even if the ones fighting back were unarmed, fewer innocents were harmed.  The answer here is obvious - the complete opposite of what you're going to hear in the coming days: more guns, not less.  As the Oath Keepers put it:


This shooting is yet another tragic example of the failed, grotesque insistence on helpless victim zones where any crazed gunman can be assured of a large number of disarmed, undefended, helpless victims, all crammed into one place, where he can kill many children before an armed defender arrives from elsewhere.  It is disturbing and sick that the federal government so hates the right of the American people to bear arms, and so hates their natural right to self defense, that the government insists on making them helpless, disarmed victims for anyone who cares to kill them.   And in this case, all of the teachers and staff were willfully disarmed by the Federal Government, by force of law and threat of prison, to ensure that they would be disarmed and incapable of saving the lives of the children entrusted to their care.

Perhaps the most important thing to tell friends is that while this may be a bad year (I honestly don't know), the data says we don't have a mass shooting problem.  In fact violent crime has been going down since a peak in about 1993, while gun ownership has been increasing - if not outright skyrocketing.  While it may not conclusively prove the "More Guns = Less Crime" hypothesis, it certainly disproves the "More Guns = More Crime" alternative that we'll hear from the usual idiots. 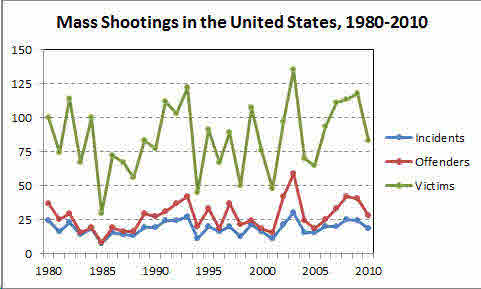 (source)
Off the top of my head, I recall about 60 victims of mass shootings this year: the Aurora, Colorado theater, the Sikh temple incident and this.  If that's the number, you can see from this plot that it ends up being a fairly low total year.

The source of that graph, Boston.com "Crime and Punishment" columnist James Alan Fox writes today, about the Newton shooting:


As the tragedy was unfolding and before any perpetrator or motive was identified, scores of journalists, from all forms of media and from here and abroad were phoning to ask whether this was the worst school shooting in history. It didn't matter that deadlier episodes had happened overseas (the 2004 school siege in Russia), at a college setting (Virginia Tech in 2007) or involving means other than gunfire (the 1927 school explosion in Bath, Michigan), reporters were eager to declare the Sandy Hook massacre as some type a new record.