I had a good question in the email this weekend, from a friend reading about EMP protection.  He wanted to know if the advice he'd seen online made sense.  It centered on grounding a box.  I thought this might be something other people would find interesting.

Every circuit has a return terminal, ground or "earth" as they call it in the UK.  It's pretty common to come across people talking about the importance of a good ground, but what makes a "good ground"?  The National Electric Code, here in the US, calls out a ground rod where the AC feeds come into your house; I think typically 8' long, and they specify wire size.  As it says over on the sidebar there, I design radio systems for a living - systems that go on commercial aircraft.  Kind of hard to sink an eight foot ground on a moving airplane, but we depend on good grounds in all of our stuff.  How can that be?

Here's the problem: as frequency goes up into the radio spectrum, you begin to find that ground doesn't really exist - in that sense.  Radio frequencies have a wavelength associated with them, and to figure out how to ground them, you need to know the wavelength.  Back when I taught Novice ham radio classes, it was pretty common for people to be confused about the way hams refer to some bands by their wavelength ("80 meters", "2 meters") and others by their frequency ("440 MHz", "10 GHz").  The wavelength is important because wires behave very differently when they're electrically very short or long.  A very short wire, under 1/20 of wave long, behaves just like you think: it's just a connection.  If that wire is quarter wavelength long and you ground the "far" end, it's not shorted to ground for that frequency, it's an open circuit - but it's still shorted to ground for DC.  You can't put that radio frequency energy into that wire.  This effect doesn't happen all at once, it gets progressively harder to achieve ground for the frequency you're working with as the distance to ground gets longer.  My usual rule of thumb is that effective grounds have to be less than 1/10 of a wavelength away.  Some folks will say you really need keep them under 1/20 wave.

What that means to your ham shack or radio comms is that the ground rod won't get any RF ("Radio Frequency") into it if it's more than a one or two feet from the radio.  The amateur "10 meter" band (28 to 29.8 MHz) requires grounds shorter than one meter (one yard for 'mercans).  While my system is well grounded at 3.5 MHz (80 meters), that ground rod is about 2 or 3 meters from my station, so it isn't grounded well at frequencies higher (shorter wavelengths) than 20 meters.

So how do you get a ground at 144 MHz or higher?  How do you get it in a moving car?  The chassis, the body is ground.  In radios with a metal chassis, the chassis is grounded.  In handheld radios, like FRS radios and amateur VHF/UHF radios, you become the ground that the antenna uses. (You are a bag of saltwater, you know...)

Getting back to the original question about grounding a box for EMP protection, what's the wavelength of EMP?  It is very broad spectrum, with energy from low frequency up to a few hundred MHz.  A ground wire can only help with part of that spectrum - the rest of the spectrum is unaffected by the ground wire.  Yes, you will shunt some energy away, and that can't hurt.

What do I do?  I have my emergency back up 2m/440 radio in a metal ammo can, just sitting on my desk.  The desk is steel and grounded to my ground system, but that's not worth much as low in frequency as 20 meters.  A microwave oven should work as well as an ammo can.  Just wrapping it well in aluminum foil is probably just as good.  The most important point is to disconnect the antennas and power lines, to minimize pickup area - minimize signals to carry into the radio.  The power lines are where the majority of pickup from an EMP will come. 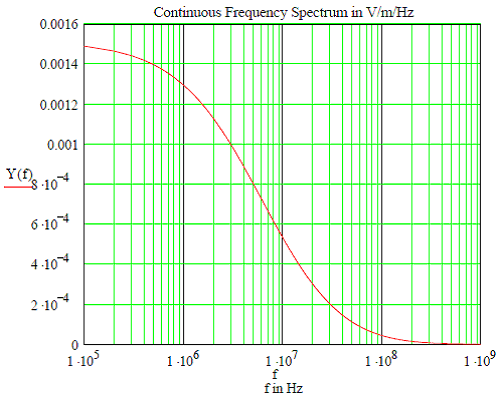 This plot of EMP voltage fields vs frequency shows that most of the voltage below 10 MHz, where a ground rod might do you some good.