Our friends at Demonocracy.info, - who were formerly known as kleptocracy.us, have come out with a new infographic covering the Federal Reserve's Quantitative Easing, or money creation, called "The Federal Reserve's Money Printing Failure ".  You should go read.  As always, it's full of stunning visualizations of the amount of money involved, depicted as stacks of $100 bills.  One picture from it, depicting the money to be printed in 2013 alone. 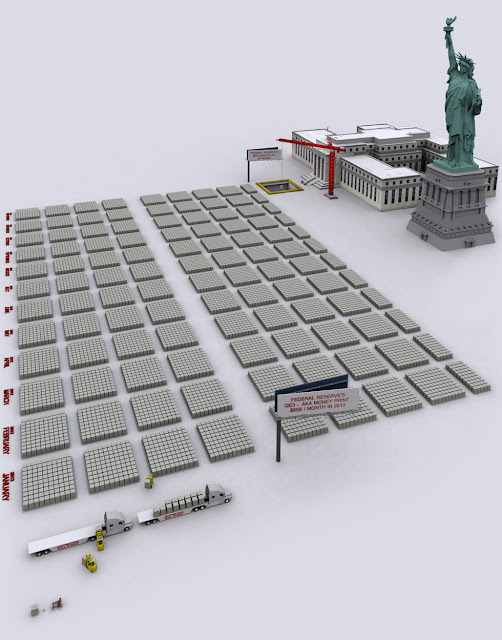 For scale, see that tiny stuff in the lower left front?  The tiny cube is $100 million dollars in $100 bills.  The dot just to right of it is simply one million dollars.  The sort of reddish dot (again, lower left) is a graphic of a woman sitting on a "sofa" made of stacks of $100 bills - it "only" amounts to just under $47 million dollars.  Each pallet in the grid is one of those $100 million dollar stacks.  The Fed's machinations will account for nearly one half of the US budget deficit in 2013 - compare to the Fed buying 61% of US debt this year.

By the end of FY 2013, the Fed's money creation will look like this: 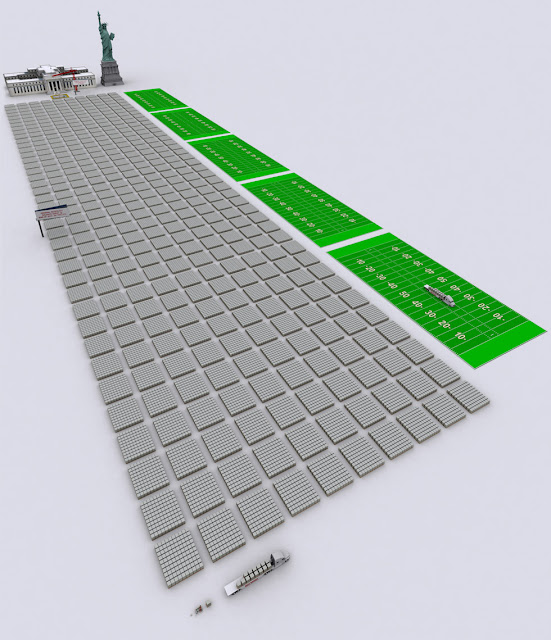 
Each economic boost through money printing (QE1, QE2, QE3) has diminishing effects, that appear to follow the Fibonacci equation. This implies that the Federal Reserve is now caught in a perpetual cycle where it has to print near exponentially more money just to maintain same stock market performance level, not mentioning inflation.

The money printed by the Federal Reserve does not end up the hands of the people, but goes directly to the banks, though whom it ends up in the stock market in order to inflate asset values. This pushes the Dow Jones Industrial Average and S&P higher, but does NOT increase hiring and above all consumer spending, which is one of the main drivers of the US economy.

This ends, of course - this implies a need to create infinite amounts of money.  It ends, but it doesn't end well.  I sincerely wish I knew how far out it will be, but I think the Congressional Budget Office saying 2027 is wildly optimistic.  I think 2020 plus or minus 10 years is as closely as it can be predicted.