On 3D Printing And Making Guns

A little diversion on the subject of making guns and stuff.

In broad terms, there are two ways of making things: additive and subtractive.  Most of us have made things out of wood, even if it's just from a mandatory wood shop class we took in school.  Woodworking is a great example of a subtractive process.  You start out with boards, cut away portions to cut elements to size, maybe cut away portions to make strong joints, or thin the the stock down to size with a plane.  Of course, it started out as a tree, so a lot was cut away or thrown away to get the lumber you started with.  Sculpting, as most of it seems to be done, is another subtractive process.  As one sculptor said, start with a block of marble and cut away everything that doesn't look like (his finished piece).

In contrast, there are additive processes, where you put down only what you need.  A rough example would be slip casting ceramics, where you pour a water-clay mixture into a mold, and form a layer of the ceramic on the inside of the mold.  You eventually remove the mold and are left with a thin layer of clay that is then glazed (or not) and fired.  Likewise, in lost wax casting, widely used in the jewelry industry, a wax mold is embedded into a ceramic that dries and sets up hard, then fired to produce a copy of the wax mold inside the ceramic, and molten gold (or silver, palladium, platinum...) is poured into the mold, putting down just the amount needed.

Quite some time ago, I did a piece on The Futility of Gun Control, in which I linked to a piece by Popehat called "The Third Wave, CNC, Stereolithography, and the end of gun control".  In that piece, he talks about 3D printers and CNC machine tools and was really right on target.  As someone with the kind of low-end, home CNC machines he talks about, I really think the emphasis on 3D printing lately, and especially the bedwetting over 3D printing a gun, is a bit excessive.

For $1300, your local Staples will get you into a Cube 3D printer.  I'm not even sure if that really gets you started, and I'm less sure you could build anything other than a single shot gun that might be as dangerous to you as someone you need to shoot.  For about two bills more than that price, you can home build a basic CNC Router.  Gizmodo just ran a piece on a Shopbot at $5000, with a work area of about 24 x 18 x 2".  Clearly intended for thin stock, like making signs or cutting things out of plywood, this is almost 4x the price of the 3D printer, and while it can make serious stuff, I don't believe you could finish an 80% lower on it.  Check out the video on this page of a couple that makes a cool triple bunk bed for their obviously delighted daughters.  They milled what looks like plywood or MDF and assembled it themselves. 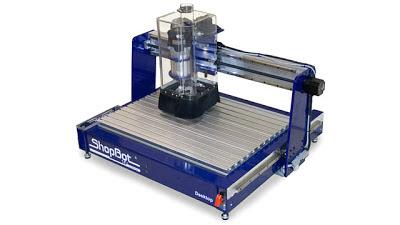 Note that the cool machine they show in most of the pictures in that article isn't this little $5000 machine, it's Shopbot's $40,000 five axis machine.  Personally, if I was going to drop $5000 on a ready made machine, I'd get one of these from Little Machine Shop: 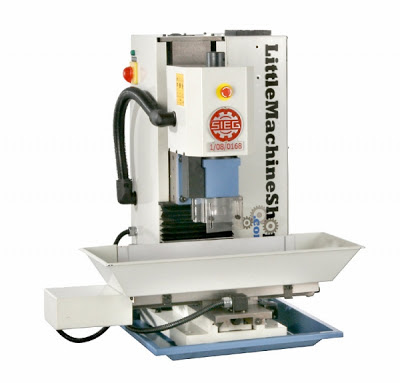 This is a Sieg (Chinese) CNC machine with a work envelope that's 10.2" × 4.3" × 7.1"; smaller in XY than the desktop Shopbot (it's not designed for quarter sheets of plywood), but tall enough to cut that fire control pocket.  It will cut aluminum, steel, stainless, titanium, brass, and other really useful materials along with wood, plastic and wax (useful for models).   Its list price is $500 less than that Shopbot, but it weighs 275 pounds so it will cost a bit to ship it and get into place in your garage.  By the way, this is considered a mini-mill.  It's not a big machine by anybody's standards.

We can get into the particulars of machines another time.  The 3D printer, as I see it, has only one thing going for it: it doesn't require much from the user to create a piece that has been designed and is known to work.  The same thing can't be said for the CNC milling machine, which needs some knowledge of machine shop practice from user.  You need to know, for example, the way you clamp your work down can change its dimensions enough to matter.  The 3D printer, to the best of my knowledge, isn't terribly dangerous.  It can burn you if the plastic is hot, but a well designed machine is probably not going to let a user stick their fingers into places where they can get hurt.  A mill, on the other hand, is capable of cutting steel, so your finger isn't going to offer much resistance!  On the other hand, if you know it can take your hand off, you tend to keep that in mind, and there's no reason any adult who can cook on a hot stove, or shoot safely, can't use machine tools safely.

Finally, I have to say that no matter what you get, it's just the start.  For the CNC machines you'll need design software and very likely software to turn part shapes into the instructions for the machine.  For the printers, you'll need 3D modeling software, too.   Some of them seem to be shipping proprietary software with their printers.