A movie I really enjoyed in the 90s was Sneakers, kind of a sleeper film starring Dan Akroyd and Robert Redford.  Ignoring their obvious liberal slant, the concept behind the film was rather ingenious.  A mathematician had developed a way of factoring enormous numbers quickly with a custom piece of hardware.  The Big Deal is that all modern cryptography relies on polynomial factoring, and what protects your data is the low probability that a computer could guess your public key so that it can factor your encrypted data.  Whenever you hear something like "it would take the fastest computers longer than the age of the universe to decrypt your messages", that depends on a whole cascade of assumptions, not the least of which is that computers never change in a materially important way.

The title of this post, by the way, is an homage to that movie.  The term "SECTEC ASTRONOMY" haunts the group for a while until, while playing anagrams with Scrabble tiles, one of them rearranges the letters to spell "TOO MANY SECRETS".

Don't look yet, but everything may be about to be turned upside down.  Thanks to a link from the Vulgar Curmdugeon, to MIT Technology Review's "Google and NASA Launch Quantum Computing AI Lab"  Quantum computing has been talked about as the next important milestone in computing and has been worked on for about 20 years, as I recall.


While regular computers symbolize data in bits, 1s and 0s expressed by flicking tiny switch-like transistors on or off, quantum computers use quantum bits, or qubits, that can essentially be both on and off, enabling them to carry out two or more calculations simultaneously. In principle, quantum computers could prove extraordinarily much faster than normal computers for certain problems because they can run through every possible combination at once. In fact, a quantum computer with 300 qubits could run more calculations in an instant than there are atoms in the universe.

All of this is highly experimental; the company making the computer D-Wave has had detractors saying its approach is flawed, it won't work, and all the usual things said about new inventions since long before the Wright brothers.  Mind you, I'm not saying this approach will, but the quantum computation problem will be solved and quantum computers will be available to do something, I'm sure.

The tie to the movie is that last sentence, about running more calculations in one instant than the number of atoms in the universe.  That means this machine could break every code we know of that relies on factoring large numbers.  It's the Sneakers machine.  And while you may not be able to buy one, a partnership of Jeff Bezos (Amazon.com) and the CIA has put up $30 million to fund research, and that's to get the first machine going.  It's likely to cost quite a bit.  Which is still chump change to Fed.gov, the CIA, the NSA and all those agencies that would love to peer into every secret transaction in the world.  Not to mention the mafia, who, like in the movie, would love to break into every bank in the world. 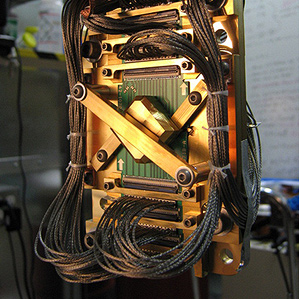