H/T to Oleg for a link to Joe Huffman's blog, "It's Not Just Gun Owners Who Are Considered Terrorists".

The root of it all is an article on Zerohedge: "Spying is Meant to Crush Citizen's Dissent, Not Catch Terrorists".  Definitely worth a read.  It's thick with links and background information, and it's really depressing to say this, but I don't think there's really anything new and surprising in there.


The opportunity those in power have to characterise political opponents as “national security threats” or even “terrorists” has repeatedly proven irresistible. In the past decade, the government, in an echo of Hoover’s FBI, has formally so designated environmental activists, broad swaths of anti-government rightwing groups, anti-war activists, and associations organised around Palestinian rights. Some individuals within those broad categories may deserve the designation, but undoubtedly most do not, guilty only of holding opposing political views. Yet such groups are routinely targeted for surveillance by the NSA and its partners.  [Note: Of those groups, how many have actually carried out terrorist acts on American soil besides the environmental activists?  SiG]

One document from the Snowden files, dated 3 October 2012, chillingly underscores the point. It revealed that the agency has been monitoring the online activities of individuals it believes express “radical” ideas and who have a “radicalising” influence on others.
***
The NSA explicitly states that none of the targeted individuals is a member of a terrorist organisation or involved in any terror plots. Instead, their crime is the views they express, which are deemed “radical“, a term that warrants pervasive surveillance and destructive campaigns to “exploit vulnerabilities”.

Government thinks anyone who doesn't fall over in adoration of them is a terrorist?  Check.  Obama claims power even Hitler and Stalin never claimed?  Check.  Hitler?  Stalin?  What a couple of pikers.   Former NSA official says, “We are now in a police state“.  Check.  Yawn...obvious to anyone with eyes to see. 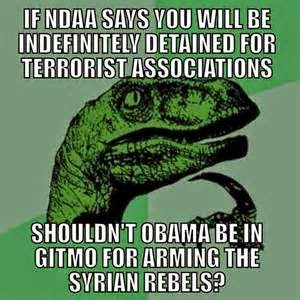