Or Techy Tuesday a day late.  The Monday holiday messed me up.

A while back, I wrote about some research being done to make bridges more earthquake resistant.  It's interesting research focused on replacing the steel reinforcing bars in concrete pilings with more flexible nitinol alloy.

While earthquakes certainly are a concern, my bet is that most bridges break down due to more mundane problems: freeze/thaw cycles and too much traffic loading.  Thanks to Machine Design blogs we read of a new technique for building bridges developed by Advanced Infrastructure Technologies.


The Federal Highway Administration estimates there are over 45,000 structurally deficient or obsolete bridges in the National Highway System, plus another 248,000 deficient bridges on smaller roads. To cut the cost of replacing many of those bridges, engineers at Advanced Infrastructure Technologies, Orono, Maine, have developed a hybrid concrete-composite bridge that also saves time and raw materials.

The key technology here is a composite exoskeleton-like superstructure formed from carbon fiber and other materials, including concrete.   The exact blend is engineered to optimize the efficiency of the bridge design, and the ability to repair a bridge and return it to service quickly is one of their selling points.  AIT says:


The system is based on original 'Bridge-in-a-Backpack' patent-pending technology, developed over an 11+ year period by the Advanced Structures and Composites Center at the University of Maine.
...
Testing at the Advanced Structures and Composites Center included structural characterization and modeling, fatigue testing for 50+ years of truck traffic, environmental durability testing for UV, fire, freeze-thaw and abrasion resistance, and instrumentaion and field load testing.

Testing to 50 years of accelerated wear is good, but 50 years doesn't strike me as a long life - although the company claims 100 year lifespans.  America is a young country and there are bridges here that are hundreds of years old.  In the "old world", bridges and structures remain that were built by the Romans and earlier, with claims of bridges still being used that were built in 1300 BC. 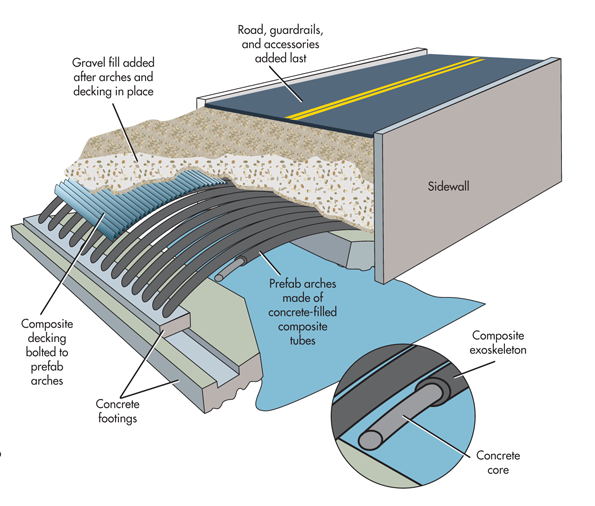 I wonder: do you think anything will be left of these composites in 3300 years?  I don't think there will be, but I don't think that's terribly important, either.  If they come up with serviceable, safe bridges that reliably carry traffic for a decently long service life, and build it "faster / cheaper / better", that's A Really Good Thing.