Waiting for the Shoe to Drop

When is the stock market going to do a real correction?  That's the big question.  Right now, I can scarcely imagine entering the stock markets.  As Chris Hunter on Seeking Alpha says (quoting Andrew Lapthorne of SocGen):

So the S&P 500 has just under 60% of the number of moderate correction days as normal, the time from a moderately big correction is the fourth longest on record, and we're supposed to believe everything is peachy?  It could well be within the bounds of normal variations, but I don't know all the factors present in those previous years; was the Fed as heavily involved as they are now, for example.  Just before the start of the year I posted this chart: 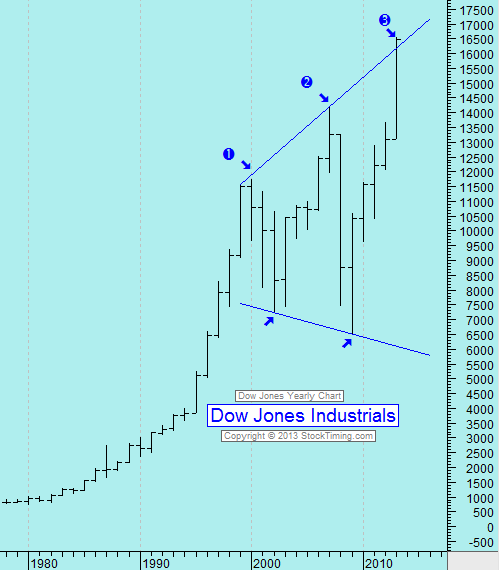 We were at point 3 on this expanding wedge and have essentially just moved sideways since then - you can see the DJIA at that point was around 16500; today it closed at 16533.  Comparing the left side of the chart to the right, before and after the start of the blue lines, you can see a progression of continually higher highs and higher lows on the left.  For example, the low on the line of 1990 was above 1989 and below 1991.  That's a normal expanding market.  After 1998, the pattern of snap backs shows up.  The ugly thing is what happens during the first to second year after the yearly tick has hit the upper resistance limit.  You can see that there is typically a very large pull back within these two year periods.  That will be in 2014 to 2015; for what it's worth, many big crashes tend to come in the fall, around the end of the Fed.Gov fiscal year (September 30). It looks like the target for the snap back is around 6000.

Dow 6000?  There would be blood in the streets.  Even if that doesn't happen, we're overdue for a correction of 20% or more. As Bill Bonner says,


Because, as anyone who understands the phenomenon of mean reversion will tell you, the longer something remains an outlier, the more likely it is to revert back to the average.

Just when that shoe drops is the big question.