Stick a Fork In It - It's Done

The much vaunted US Army. 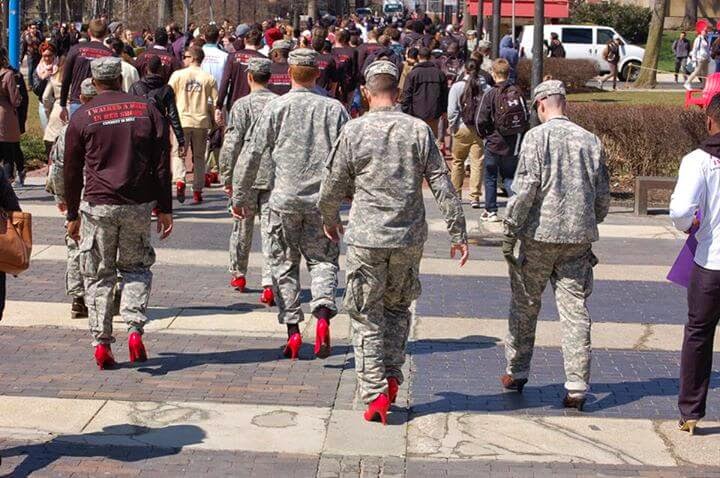 Overcome by political correctness, neutered commanders forced ROTC members at several Universities to walk across campus in red high heels.  The cause was “Walk A Mile in Her Shoes”, an event designed to raise awareness of sexual violence against women.  You know, that whole debunked "rape culture" idea that comes from a handful of made-up stories, like the Duke Lacrosse team or the fake UVA fraternity "gang rape" that just took place on the pages of Rolling Stone magazine.


“Attendance is mandatory and if we miss it we get a negative counseling and a ‘does not support the battalion sharp/EO mission’ on our CDT OER for getting the branch we want. So I just spent $16 on a pair of high heels that I have to spray paint red later on only to throw them in the trash after about 300 of us embarrass the U.S. Army tomorrow,” one anonymous cadet wrote on the social media sharing website Imgr, IJReview reported Monday.

This photo is tagged on the IJReview as being at Temple University; the PJ Tattler article (first link) refers to the same thing happening at Arizona State University.  It has been widely reported as being nationwide.  Borrowing from the PJ Tattler piece by Debra Heine:


During the Obama years, the military has become a hostile environment for Christian chaplains, and Christians in general. By the spring of 2013 — after Obama had been safely reelected — the hostility became palpable. That April, it was widely reported that an Army instructor in Pennsylvania had labeled evangelical Christians, Catholics, Orthodox Jews and Mormons “religious extremists” alongside Hamas and al Qaeda during an Army Reserve Equal Opportunity training brief on extremism. Later that month, an Army officer at Ft. Campbell, KY, sent an email to subordinates using similar descriptions to describe two mainstream Christian ministries that were put in the same category as Neo-Nazis, racist skinheads, white nationalists and the Ku Klux Klan. Shortly after that, the United States Army blocked the website of the Southern Baptist Convention from government computers.

It appears the "fundamental transformation" is complete.  I've heard from friends that the level of morale in the military is lower than it has been since the Clinton cutbacks in the '90s.  I know there are good guys out there in uniform, but I can just imagine regimes that might want to take our land, oil, and other treasures looking at this and saying the US is ripe for pushing over.