Tech Tuesday - Solar Powered Spacecraft. No, Not That Kind!

If I say "solar powered space travel", chances are you'll think of solar sailing.  Solar sailing has been researched for a couple of decades and used in movies like this scene from one of the Star Wars second trilogy. It has even been tried a couple of times in the real world.  The large areas of thin, light material, catch the pressure of the solar wind and can accelerate spacecraft across solar system distances. 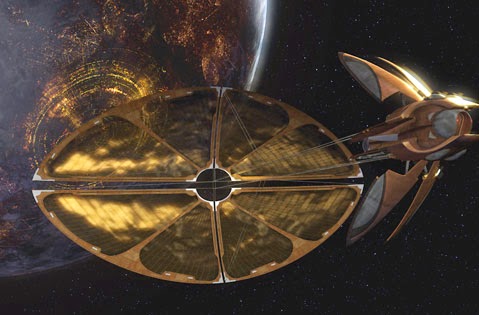 There is another way.  Electric thrusters that get their power from the practically unlimited solar power available in space and large solar power arrays.

Electric ion propulsion thrusters, such as the Hall Thruster, were first proposed and prototyped in the 1960s in both the US and the Soviet Union.  US researchers went on to another class of ion engine while the Soviets produced the first useful Hall thrusters, and launched their first flight carrying one aboard a Meteor spacecraft in December 1971. They were mainly used for satellite stabilization.  These engines were launched regularly and some are working on orbit now.

These engines are useful for tasks requiring small amounts of thrust, grams instead of pounds.  Things like small tweaks to the position of a satellite on orbit.  They're never going to replace a chemical engine for lifting rockets into space, but their potential is that they can apply small amounts of thrust for very long times.  In the drag-free environment of space, the acceleration is cumulative and can lead to impressive speeds:


Hall thrusters have a specific impulse typically in the range 1,200 to 1,800 seconds – much higher than the 300 to 400 seconds of chemical rockets. However, they provide a much lower thrust. A modern Hall thruster can deliver up to 3 newtons (0.7 pounds) of thrust, which is equivalent to the force you would feel by holding 54 US quarters in your hand. The high specific impulse enables a spacecraft powered by a Hall thruster to reach a top speed of about 50,000 meters per second (112,000 mph). The low thrust, on the other hand, means that weeks or months are needed to attain this speed.

EngineeringTV, a video channel produced by one of the trade magazine publishers and aimed at the engineering market posted two videos on the subject: "How Do Hall Thrusters Work?" and "How Electric Propulsion Could Help NASA Capture an Asteroid".  Dave Manzella of NASA's Glenn Research Center explains how these engines work.  (NASA artist's conception of a Solar Electric Propulsion spacecraft) 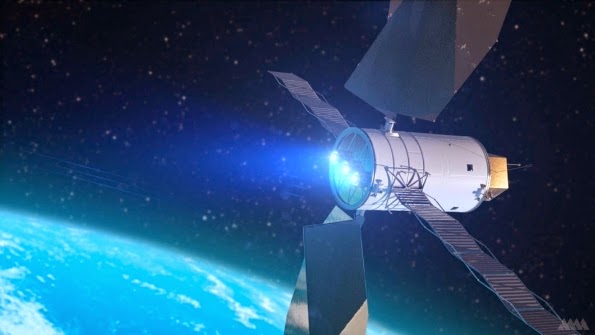 There's drawback (there's always a drawback): they don't just create electric charge from a power supply and use that to create thrust.  They ionize a gas which gets expelled to create the thrust; the noble gas Xenon is preferred for its low ionization energy and large atoms.  The gas produces an ion stream that leaves the vehicle creating that thrust, but then it's gone.  Once the Xenon tank is empty, no more fuel, no more ion propulsion.