Wisconsin, the cradle of progressive politics, has lessons to teach us all about the horrors of the merger of state and unions.  Ed Morrisey at Hot Air summarizes the story, with links to David French's in-depth report of the terror of Wisconsin’s “John Doe” raids in a new report for National Review (you should RTWT):


Cindy Archer, one of the lead architects of Wisconsin’s Act 10 — also called the “Wisconsin Budget Repair Bill,” it limited public-employee benefits and altered collective-bargaining rules for public-employee unions — was jolted awake by yelling, loud pounding at the door, and her dogs’ frantic barking. The entire house — the windows and walls — was shaking.

Others noted by David French in that National Review article also participated in conservative politics and policy development, all of whom got raided in exactly the same manner — warned not to talk about it, warned not to get a lawyer, all while the government confiscated their papers and computers.  How can this be legal?

How does something like this start?  Politics.  How else?

What followed, however, was anything but routine. Chisholm failed to act promptly on the report, and when he did act, he refused to conduct a conventional criminal investigation but instead petitioned, in May 2010, to open a “John Doe” investigation, a proceeding under Wisconsin law that permits Wisconsin officials to conduct extensive investigations while keeping the target’s identity secret (hence the designation “John Doe”).

John Doe investigations alter typical criminal procedure in two important ways: First, they remove grand juries from the investigative process, replacing the ordinary citizens of a grand jury with a supervising judge. Second, they can include strict secrecy requirements not just on the prosecution but also on the targets of the investigation...

Why would Chisholm seek such broad powers to investigate a year-old embezzlement claim with a known suspect? Because the Milwaukee County executive, Scott Walker, had by that time become the leading Republican candidate for governor. District Attorney Chisholm was a Democrat, a very partisan Democrat.

Of course, this was the point: to intimidate conservatives into not speaking, not organizing into a real political movement.  Wisconsin Club for Growth head Eric O'Keefe found that affiliates were cancelling meetings and refusing to talk with him.  They understandably thought being affiliated with someone who had gone through such investigation might lead to getting the early morning battering ram raids themselves.  O'Keefe had to abandon fundraising for the Club because he could no longer guarantee to donors that their identities would remain confidential, could not (due to the Secrecy Order) explain to potential donors the nature of the investigation, could not assuage donors’ fears that they might become targets themselves, and could not assure donors that their money would go to fund advocacy rather than legal expenses. As O'Keefe later said, "The process is the punishment".


In international law, the Western world has become familiar with a concept called “lawfare,” a process whereby rogue regimes or organizations abuse legal doctrines and processes to accomplish through sheer harassment and attrition what can’t be accomplished through legitimate diplomatic means. The Palestinian Authority and its defenders have become adept at lawfare, putting Israel under increasing pressure before the U.N. and other international bodies.

The John Doe investigations are a form of domestic lawfare, and our constitutional system is ill equipped to handle it.

In the coming days, thanks to the gyrocopter idiot, you'll be hearing a lot of talk about campaign finance.  I've written many times that I think the role of money in politics is overblown: it's an easy excuse for rotten campaign managers or rotten candidates and we routinely see the underfunded candidate win.  The counter to that is the argument that big money controls everything.  I've already heard the arguments that Hildebeest has got "2.5 billion dollars" and will win.  The basis for the horrors people went through was the idea that money in politics is a greater evil than a government empowered to shut down political speech.

The John Doe law in Wisconsin shows exactly why government intervention in political speech is worse than any corruption it attempts to prevent. The use of force in Wisconsin got applied to one side exclusively, and intended to shut down conservatives before they could exercise their legitimate political power. It’s even more egregious than the IRS targeting of conservatives between 2009-2013, but it’s the same kind of abuse of power, and it leverages the same kind of campaign-finance reform statutes that give government at state and federal levels entrée to control political speech. 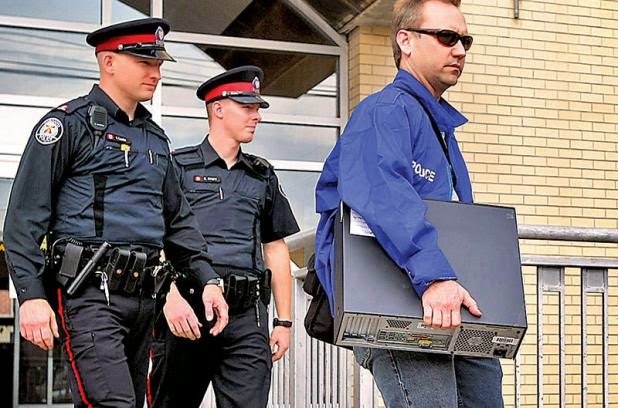 (generic stock-ish photo of police seizing computers, as happened to so many conservatives in Wisconsin - from Metronews.ca)