The 100th Anniversary of the First Holocaust of the 20th Century

Today marks the 100th Anniversary of Armenian Genocide, which is becoming regarded as the first holocaust of the 20th Century.

In an eerie preview of Hitler's holocaust and its links to Islam, reference Hitler's alliance with Haj Amin al-Husseini, the Grand Mufti of Jerusalem, the Armenian Genocide was carried out by Turkish Muslims trying to drive every Christian out of their land.  Because of the size of such a wholesale murder operation, it requires a government to carry out a genocide, and (source):


The Armenian Genocide was centrally planned and administered by the Turkish government against the entire Armenian population of the Ottoman Empire. It was carried out during W.W.I between the years 1915 and 1918. The Armenian people were subjected to deportation, expropriation, abduction, torture, massacre, and starvation. The great bulk of the Armenian population was forcibly removed from Armenia and Anatolia to Syria, where the vast majority was sent into the desert to die of thirst and hunger. Large numbers of Armenians were methodically massacred throughout the Ottoman Empire. Women and children were abducted and horribly abused. The entire wealth of the Armenian people was expropriated. After only a little more than a year of calm at the end of W.W.I, the atrocities were renewed between 1920 and 1923, and the remaining Armenians were subjected to further massacres and expulsions. In 1915, thirty-three years before UN Genocide Convention was adopted, the Armenian Genocide was condemned by the international community as a crime against humanity.

An attempt to kill every person of some minority is too big a crime to be committed in one day.  April 24, 1915 is generally considered the starting day because 200 Armenian Christians were rounded up in Constantinople (Istanbul) and arrested that day, a task made easier by having disarmed the Armenians (again, a preview of Hitler's holocaust).  Most of the 200 were summarily executed immediately.

It's generally concluded that 1.5 million Armenians (out of a population of 2 million) were killed  between 1915 and 1923.  In addition to those people, 750,000 Assyrians, and 500,000 Greeks were murdered.  2.75 million Christians were killed in total by Muslims who could not bear to have Christians living in "their" territory.  Likewise, it's generally concluded that the Armenian genocide served as an example for Hitler.  He is quoted as having used the rationalization, "Who, after all, speaks today of the annihilation of the Armenians?"

Today, the Islamic State (or ISIS or whatever they call themselves) is in a campaign to bring back the idea of genocide of any non-Islamic groups.  They murder Christians whenever and wherever they can.  They massacre Yazidis, Kurds, anyone that isn't their version of Islam.  Not to mention their taking of women as sex slaves everywhere they go.  Christians and others fleeing the hell of north Africa into Europe are at the root of the migration crisis the EU is facing now.

And so the 21st century begins as the 20th did: in the violence of a 7th century death cult's world view.  People tell me we have no need to be concerned about ISIS.  They say ISIS isn't here, or it's all made up, like some sort of Hollywood special effects blockbuster. 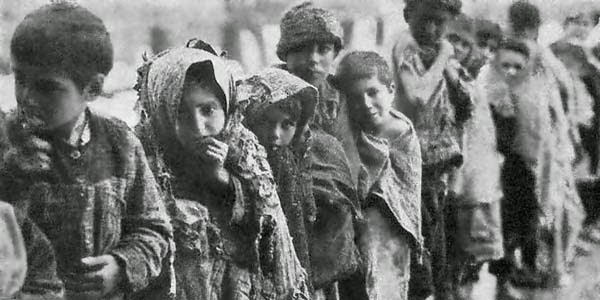 (Armenian children on their way to "exile" and likely death).  Look at this long and hard.  This is what they do.  This what we'll get.  WWIII has already started, it's just taking time getting cranked up.