Leave it to Berzerkley.  The University of California at Berkeley, AKA The People's Republic of Berkeley.

According to several news reports (H/T to Daily Caller), Activists at the University of California at Berkeley got naked on Saturday to show their love for nearby trees that authorities are planning to cut down.


About 50 people showed up at a grove of eucalyptus trees on the campus of UC-Berkeley, stripped off their clothes, and began to intimately interact with the trees in the grove for the benefit of photographer Jack Gescheidt.

Eucalyptus trees?  They're an invasive species in California, and are targeted for control by UC Berkeley, the city of Oakland and the East Bay Regional Park District.  We had a pair of them here at "Castle Graybeard" when we first moved in and for our first 10 years or so, eventually cutting them down and replacing them with a native oak tree.  Eucalyptus trees are messy, dropping sheets of bark, and lots of branches of all sizes on a regular basis.  My final incentive to remove them was when a branch about 3" in diameter came falling down and bounced into our old sliding glass doors.  It didn't break one, but would the next big branch?  Chopping these trees down in California is part of fire mitigation efforts.  Ever heard of eucalyptus oil?  It's flammable.

It gets better (if you like to laugh at tree huggers).


The nudity was organized by (Jack) Gescheidt as part of his Tree Spirit Project, an effort to create fine art photographs by, well, taking pictures of naked people while they cavort about in nature. The project’s website describes it as an attempt to “raise awareness of the critical role trees play in our lives, both globally and personally.”

Naturally, I had to take a look at that Tree Spirit Project webpage, and all I can say is he's either really interested in trees, or he really likes getting people to take their clothes off so he can photograph them ... interacting on, around, and sometimes in trees.  There's a word for that, and it involves mandatory reporting and registering when you move around the country. 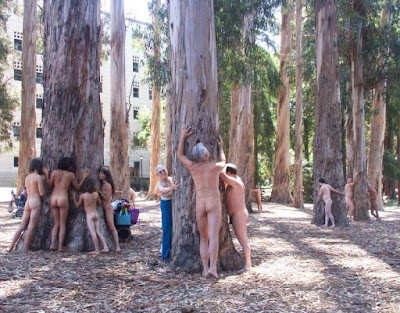 Throughout the land, the plaintiff cry of the tree hugger could be heard, "Ouch, dammit!  Does anyone have any tweezers?"

Labels: commies and other idiots, enviro-nuts and flakes, funnin_around