Inside the Orion Space Capules

Let's lighten things up a little, since yesterday's post on the currency wars and efforts to end the dollar's reign as the world's reserve currency is kind of depressing.  It would lead to a pretty massive destabilization of the US, and you've got to believe a lot of people would die.

How about a tour of the developing Orion capsules' prototype interior, courtesy of Design News magazine?  If you'll recall, the Orion capsule had its maiden voyage last December and is currently in the running to be the ultimate vehicle which will carry man to Mars (assuming it gets chosen over the competing designs). 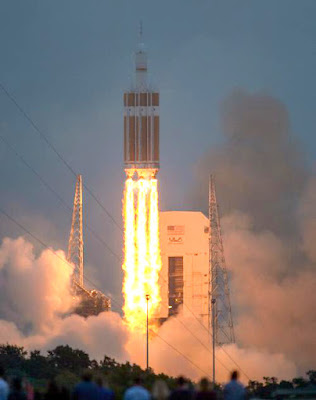 The displays in the capsule are going to be glass cockpit, instead of knobs and switches.  Cool?  Maybe.  Switches and hardware have the side effect of focusing the designers on the interface, and making them consciously choose every control they need and where it goes, with the stark realization that they can run out of panel space.  Glass cockpits with the infinitely reconfigurable options software engineers have can generate so many options the controls become less usable, especially in a crisis when multiple alarms are going off and they're looking at unfamiliar displays.  In an effort to make the system more user-centric, they can end up making it user-hostile.

There's an interesting thread of ideas in the comments too. The idea is that space flight ends up being less like a test pilot's flights - a few hours in a new plane to work out kinks - and more like submarine missions.  A test pilot can often punch out; pull the handle and exit the plane.  A submariner will generally be on a mission for months in a very hostile environment, and they generally can't  punch out.  Submariners either resolve their problems or go down with the ship - sometimes suddenly and with no time to figure things out.  Astronauts, as we've seen too often in the last 30 years, also go down with their ship suddenly, with no time to do anything about it.