For the first time in the history of this blog, I'm going to put up a content warning for graphic, disgusting language.  Not f-words or boring old stuff like that.  Gruesome, disgusting things.

First, there was all the hidden camera video from Planned Parenthood, talking about harvesting baby parts for sale.  Talking about how they mastered just slightly side-stepping the law by putting a baby in breech position so they could crush it's little skull and still harvest a healthy liver and maybe a heart and lungs.  How they do "less crunchy" abortions so that the valuable little organs are available for sale so they can recover their costs - as one of the modern Dr.s Mengele put it.  As Michael Ramirez put it: 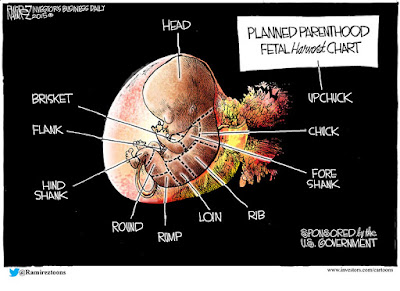 But everyone knows abortion is supposed to be "available, safe and rare", right?  It turns out that isn't quite right.  In New York City, more black babies are aborted than born.


In 2012, there were more black babies killed by abortion (31,328) in New York City than were born there (24,758), and the black children killed comprised 42.4% of the total number of abortions in the Big Apple, according to a report by the New York City Department of Health and Mental Hygiene.

That's about a 1.25 aborted to every live birth, roughly 5/4.  As actress Stacey Dash put it, Black Lives Don't Seem to Matter in NYC.   She also publishes an astounding quote by Supreme Court Justice Ruth Bader Ginsburg in a 2009 interview with the occasionally-truthful New York Times.


“Frankly I had thought that at the time Roe was decided, there was concern about population growth and particularly growth in populations that we don’t want to have too many of.”

“...growth in populations that we don’t want to have too many of.” WTF???  Is this Margaret Sanger in the 1920s?  I've heard her referred to as Darth Vader Ginsburg.  She's earning it here.

Look, I know this is a difficult subject.  The life of unwanted children isn't a wonderful bed of roses.  The tired old argument about exceptions for incest only applies to 1% of abortions (according to Wikipedia), so it just distracts attention from the other 99%.  It's dishonest to talk about "tissue" and speculating "when does it become a human life?"  What do they think it is before then, a squid?  If it's not a life at all, what is it then: a Volkswagen?  It just strikes me as incredibly disconnected to have children in a neonatal intensive care unit who are a month or more older than a child being aborted across town.  A baby born 6 weeks premature is considered pretty likely to make it these days, but Planned Parenthood is talking about harvesting their organs.