The Resounding Stupidity of Central Banks and Central Planners

"Resounding stupidity" may sound a bit harsh, especially coming from us unwashed mundanes when we criticize our central bank philosopher kings.  But what other word can you apply to a group that is told of a better way to do their job, shown real world experimental results that show the suggested way really does work better, and yet chooses to ignore those results and follows their old models?

Note that in what follows, unless otherwise linked or attributed, the technical information and quotes in this post come from chapter 6 of:

The contrast to the way the European Central Bank is handling Greece and, by extension, what I'm sure you've heard referred to as the PIIGS countries (Portugal, Ireland, Italy, Greece, and Spain) is found in the BELL countries of Bulgaria, Estonia, Latvia and Lithuania.  Haven't heard of them?  That's because their story is a success story.

This is one of those rare instances in international monetary policy where there's almost a perfect controlled experiment.  Beginning in 2008 and continuing into 2009, each BELL country suffered approximately a 20 percent decline in output in those two years, and unemployment reached 20 percent. The decline in output in the GIIPS in the same period was only slightly less.  (Note that Jim Rickards uses the acronym GIIPS instead of PIIGS -- I don't know why).  Both groups suffered a loss of foreign investment and loss of access to the capital markets of about the same size.


From these comparable initial conditions, divergent policies were pursued. The GIIPS initially continued so-called economic stimulus and made only slight cuts in public spending. Greece actually increased the number of government employees between 2010 and 2011. The principal way of addressing fiscal issues in the GIIPS was through tax increases. The internal adjustment process of lowering unit labor costs began in the GIIPS only in 2010, and serious fiscal and labor market reform was begun in 2013; much work remains.

In contrast, the BELLs took immediate, drastic measures to put their fiscal houses in order, and strong growth resumed as early as 2010 and is now the highest in the EU. The turnaround was dramatic. Latvia’s economy contracted 24 percent in 2008– 9, but then grew over 10 percent in 2011– 12. Estonia contracted 20 percent in 2008– 9 but grew at a robust 7.9 percent rate in 2011. Lithuania’s economy did not suffer as much as the other BELLs in the crisis and actually grew 2.8 percent in 2008. Lithuania’s growth did decline in 2009, but it bounced back quickly and rose 5.9 percent in 2011. This pattern of collapse followed by robust growth in the Baltic BELLs is the classic V pattern that is much discussed but seldom seen in recent years because governments such as the United States use money printing to truncate the V, leaving protracted, anemic growth in its wake.

How does one account for this sharp turnaround in the Baltic states’ growth compared to the EU periphery? Anders Åslund, a scholar at the Peterson Institute for International Economics in Washington, D.C., and an expert on the eastern European and Russian economies, has written extensively on this topic. He attributes economic success in the Baltics and failure in southern Europe from 2009 to 2012 to specific factors. When confronted with severe economic contraction, he suggests, an affected nation must embrace the crisis and turn it to political advantage. Political leaders who explain clearly the economic choices to their citizens will gain support for tough policies, while leaders such as those in the United States and southern Europe who deny the problem’s depth will find that the sense of urgency recedes and that citizens are less willing over time to make the needed sacrifices. Åslund also urges that countries facing economic crises should embrace new leaders with new ideas. Vested interests associated with old leadership will be most likely to cling to failed policies, while new leaders are able to pursue the cuts in government spending needed to restore fiscal health.

Åslund also recommends that the emergency economic responses be clearly communicated, front-loaded, and weighted more to spending cuts than tax increases. Citizens will support policies they understand but will be ambivalent about the need for spending cuts if politicians sugarcoat the situation and prolong the process. He also says that “credible culprits are useful.” In Latvia’s case, three oligarchs dominated the economy in 2006, and 51 percent of the seats in parliament were held by parties they controlled. Reform politicians campaigned against their corruption, and by 2011 the oligarchs’ representation had shrunk to 13 percent. The United States also had corrupt bankers as ready-made culprits but chose to bail them out rather than hold them accountable for the precrisis excesses.

Finally and most important, Åslund emphasizes that the restructuring process must be equitable and take the form of a social compact. All societal sectors, government and nongovernment, union and nonunion, must sacrifice to restore vigor to the economy. With regard to Latvia, he writes, “The government prohibited double incomes for senior civil servants . . . and cut salaries of top officials more than of junior public employees, with 35 percent salary cuts for ministers.” Again, the process in the Baltics contrasts sharply with that of countries such as the United States, where government spending has increased since the crisis. In the United States, public union and government employee salaries and benefits have mostly been protected, while the brunt of adjustment has fallen on the nonunion private sector. Åslund concludes by noting that these recommendations were mostly followed in the Baltics and disregarded in the southern periphery, with the result that the Baltics are now growing robustly while Europe’s southern periphery is stuck in recession with uncertain prospects.

For those not keeping score: the PIIGS used conventional central bank and central planner approaches.  They raised taxes and followed conventional "economic stimulus" programs, such as loans and top-down commands on wages.  They didn't touch unions and their wages.  The BELLs followed more market based and certainly more conservative approaches: they slashed government spending and let the market sort things out.  Yes, some wages went down (Paul Krugman in the broad brush believes wages are not governed by markets and never go down).  Some folks were undoubtedly hurt or massively inconvenienced.  Yet by 2013, the occasionally fact-based NY Times covered the Latvian turnaround.


When a credit-fueled economic boom turned to bust in this tiny Baltic nation in 2008, Didzis Krumins, who ran a small architectural company, fired his staff one by one and then shut down the business. He watched in dismay as Latvia’s misery deepened under a harsh austerity drive that scythed wages, jobs and state financing for schools and hospitals.

But instead of taking to the streets to protest the cuts, Mr. Krumins, whose newborn child, in the meantime, needed major surgery, bought a tractor and began hauling wood to heating plants that needed fuel. Then, as Latvia’s economy began to pull out of its nose-dive, he returned to architecture and today employs 15 people — five more than he had before. “We have a different mentality here,” he said.

Christine Lagarde, Director of the IMF, commented in a speech in Riga, Latvia


While challenges remain today, you have pulled through. You have returned to strong growth and reduced unemployment. . . . You have lowered budget deficits and kept government debt ratios to some of the lowest in the European Union. You have become more competitive in world markets through wage and price cuts. You have restored confidence and brought down interest rates through good macroeconomic policies. We are here today to celebrate your achievements.

By February of 2012, Estonia was recognized as the fastest growing economy in the Eurozone, while Greece was in Year Three (Four?) of its Continuing Crisis


Today, Estonia’s economy is the fastest-growing in the currency bloc, consumers and businesses are paying lower interest rates, and business ties with Finland—a euro member state and Estonia’s main trading partner—are tighter than ever. “Lots of Finnish producers seek cooperation partners here now as things are more transparent for them,” says Ermo Saks, owner of an audiovisual production company in the capital of Tallinn, where costs are still 48 percent lower than in Finland.

Let me post a graph that has been here before in several updates.  It used to come from the Calculated Risk blog - to be honest, I don't know if they still keep it up.  This is from last August ('14) when the recovery was complete (yeah, right).  The X axis (horizontal) is the length of all recessions since WWII, and the Y axis (vertical) is the depth of the recession, measured as percent job losses. 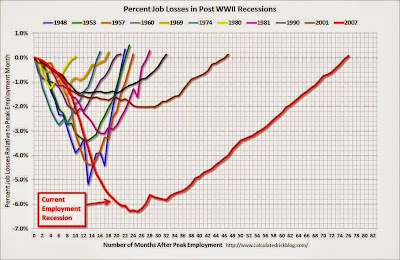 What I'm showing here is the pattern of short, V-shaped recessions (what Rickards calls the "classic V pattern" above) vs the longer, flatter, sort-of-a-flattened-U shape recession we had in 1990, 2001 and since 2007.  This is the kind of effect we're talking about.  The BELL countries, got over their recessions faster, and got back to growth.  Although this chart shows the US recovery was over by last summer, it's not hard to find evidence that we've never returned to pre-2007 levels of employment.  The US Labor Participation rate is still the lowest it has been since the late 1970s.  People who are out of the labor market don't get counted in the unemployment rate that's used in this chart.

Taken in overview, the way the BELLs handled the crash of '08 is a lesson not just for Mario Draghi and the European Central Bank, but for Janet Yellen of the Fed and Haruhiko Kuroda of the Bank of Japan.  The central banks could do well to back off from their overriding love of control and let the market work.  Does everything always look perfect under the market?  Of course not.  But it's self-correcting and infinitely faster to find a better solution than doctrinaire bankers who are shown a better way of doing things and then refuse to follow it.

The central bankers are as intellectually inbred as any group of inbreds that you can imagine: there is no real diversity of thought to be found.  Asked to comment on the lessons of Latvia, on how much better the different policies worked out, economics professor Morten Hansen, head of the economics department at the Stockholm School of Economics in Riga refused to think what worked in the BELL countries was a worthwhile experiment, saying:


“The lesson of what Latvia has done is that there is no lesson.”

The US Federal Reserve, under Ben Bernanke at the time, swore we would not repeat the mistakes the Bank of Japan made that led to their 20 year recession; in fact, we've repeated every single one.  Some of them more than once.

Posted by SiGraybeard at 6:43 PM