University of Michigan researchers have demonstrated the smallest complete computer to date: the Michigan Micro Mote.  They estimate 150 of them would fit in a sewing thimble.


“To be ‘complete,’ a computer system must have an input of data, the ability to process that data – meaning process and store it, make decisions about what to do next – and, ultimately, the ability to output the data,” says David Blaauw, a professor of electrical engineering and computer science at the University of Michigan. “The sensors are the input and the radios are the output. The other key to being a complete computer is the ability to supply its own power.”

Think of these as smart sensors.  With a power source, sensor and radio link, these could be used in places where it's too difficult to get something bigger.  Early talk is using these for medical purposes: monitoring processes inside the body, as well as conducting EKGs and detecting and monitoring tumor growth.  If you're of a certain age, you'll recall the 1966 film Fantastic Voyage.  It's not a miniature submarine with an equally miniature Raquel Welch in it, but the Micro Mote can actually be injected into the body to perform some of these functions. 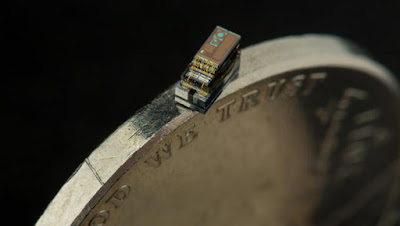 Here's one perched on the rim of a nickel.   You'll note the glaring absence of a keyboard, mouse or monitor.  Instructions are sent to the Micro Mote by flashing a light at it (On Off Keying).  The output comes over the radio link, which they say is short range, on the order of 2 meters.

The biggest problem in creating these dedicated computers is power.  The Micro Mote includes a "solar cell" which produces enough power to run the computer even indoors.  With a 1mm2 solar cell producing 20nW (20 nanoWatts, or 20 billionths of a Watt), the device can harvest enough energy under ambient light to run perpetually. The device’s standby current consumption is 2nA - 2 billionths of an Amp - claimed to be about one millionth of the standby current in typical cellphone.

The University of Michigan website has some ideas on interesting uses for "smart dust".  I think we can count on some of these being developed! 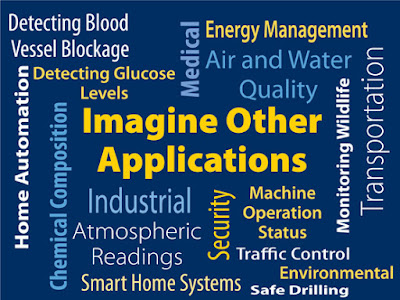