Peering Out of the Bunker of Doom

I'm cautiously peering out of the Bunker of Doom, wishing the AR in my hands was a BAR.  Nobody rioting.  Nobody with ruck sack and a rifle slung over their shoulder.  No MRAPs.  Just a normal summer evening.

China's markets lost again today.  They're down over 32% from the peak of the bubble.  Bayou Renaissance Man points out that they're on the virtually the same slope as the US crash of 1929.   Estimates are that the total amount of wealth that has vanished in China totals $3.2 Trillion, which is approximately the GDP of the UK.

It's spreading.  The commodities China has been buying - to fund its mal-invested State Run Enterprises that do things like build cities with no inhabitants - are now sitting.  Peter points out that iron ore is down 10%.  Copper is down 15% in the last 60 days.  Chinese steel is cheaper than cabbage.  Silver is at five year lows.

The market shutdown on the NYSE was unsettling.  Zerohedge has the post mortem,


What began as a glitch in pre-market trading turned into the NYSE's longest trading halt since Hurrican Sandy battered the East Coast. The ever-increasing complexity of US equity markets combined with an ever-decreasing pool of greater fools leaves windows open on down days (for it appears these 'glitches' only ever occur on down days) for markets to break. While NYSE traders defended the very market structure they have abhorred in the past as evidence that today was "not a failure," we can't help but find CNBC's Scott Wapner's amusing remark that "if retail investors want low cost liquid trading they are going to have learn to live with it" the perfect post-mortem for a rigged system brimming with confident insiders ever excited to take mom-and-pop's money.

ZH also speculated that we could be seeing what cyberwar looks like:


After a series of cyber failures involving first UAL, then this website, then the NYSE which is still halted, then the WSJ, some have suggested that this could be a concerted cyber attack (perhaps by retaliatory China unhappy its stocks are plunging) focusing on the US. So we decided to look at a real-time cyber attack map courtesy of Norsecorp which provides real time visibility into global cyber attacks.

What clearly stands out is that for some reason Chinese DDOS attacks/hackers seem to be focusing on St. Louis this morning. 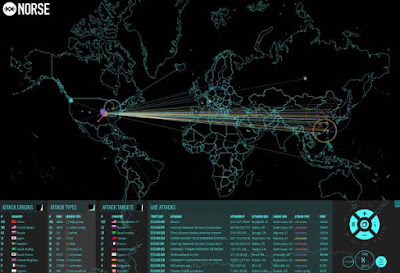 Mrs. Graybeard finds links that St. Louis is actually a headquarters of the folks who research hacking attacks, and they put out honeypots to catch them.  Naturally, that will make it look like they're concentrating on St. Louis.  I mean, the NYSE really isn't even in New York anymore, not all of it.  But St. Louis?  Unless their going after Anheuser Busch...

So reassured the Zombies haven't started shuffling, and feeling simultaneously relieved yet somehow slightly depressed that it looks like I go to work tomorrow, I flip the happy switch to SAFE, drop the magazine and eject the round from the chamber. But I'll be watching the markets a bit more closely tomorrow.