Anyone who has had cancer or even just been close to someone who has had it knows the phrase, "slash, poison, burn"; the standard treatment for cancer.  Just saying surgery, chemotherapy, and radiation is an oversimplification.  Surgery to remove the tumors is usually first, although I've met people who got poisoned first - chemotherapy to shrink the tumors.  Radiation therapy is last in this order, and frequently is last, but it's sometimes the only treatment.  Radiation therapy consists of using high energy subatomic particles; literally exposing the patient to intense blasts of radiation.  As in all cancer treatment, the goal is to kill the cancer without killing the patient.

While there are different ways to apply radiation, in external beam therapy, patients are literally placed at the cross hairs of particle accelerator to slam high energy particles into their bodies.  I'd say "into the tumor", but if the surgery was successful, there's no tumor left. The particle beam is slamming into tissue to wipe out a few bad cells that may have slipped past the scalpel into the body, and not been poisoned by the chemotherapy.


For many different types of cancers among patients in various age groups, proton beam radiotherapy treatment (PBRT) is a desirable alternative to other types of radiation therapy. In PBRT, synchrocyclotrons, cyclotrons, isochronous cyclotrons, synchrotrons, and other proton accelerators release high-energy proton beams to radiate cancerous tumors. A proton beam can be directly aimed at a tumor, sparing healthy surrounding tissue from radiation.

With only 14 clinics in the U.S., PBRT is not available to all who qualify. For more than 10 years, scientists at MIT’s Plasma Science and Fusion Center (PSFC) have been researching new synchrocyclotron designs to lower PBRT-machine costs in cancer-treating clinics around the world.

In 2008, a team at MIT’s Plasma Science and Fusion Center designed a lightweight and compact synchrocyclotron by replacing the copper electromagnetic coils with superconducting varieties. Superconductive coils are cooled to low temperatures in order to reduce the resistivity of the material. They allow for smaller coils with less turns to generate higher magnetic fields, and can decrease the overall weight of an accelerator.

The new design could be placed directly on the gantry head that directs the proton beam at tumors. MIT’s synchrocyclotron gantry design replaces the old setup—the synchrocyclotron’s large size typically requires a separate room from the gantry and patient.

The article claims many improvements for the new PBRT machines over the old design, including a cleaner, more patient friendly layout.  ProNova Solutions is the company commercializing this treatment.  High temperatures superconductors have been around since the late 80s, but don't have much role in the world outside the physics lab.  I'm aware of some superconducting electronics sold for use in cellular base stations (paper here - pdf warning) and that puzzled me.  The infrastructure to pump liquid nitrogen over these systems must be a big cost, but it was explained that the rent paid for cellular installations on buildings like the Sears Tower or Empire State goes into the millions of dollars per square foot. 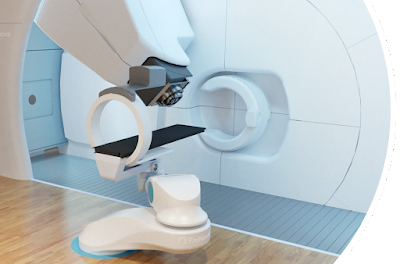 (Source)
It's a cool design and interesting to see superconductor technology in medicine... but it's still to create a machine to shoot you with high energy particles out of a "flesh-searing relativistic particle cannons".  It's still a pretty awful thing to do to a person.  I keep hearing that genomics is going to radically change cancer therapy.  Obsoleting this sort of treatment would be wonderful.