They just can't execute their dreams because of their insane leadership's priorities (I'm thinking Muslim outreach).  Still, for coolness factor, this autonomous robotic submarine to explore Saturn's moon Titan is tough to beat.  While this is entirely dreams and conceptual studies now, the program is one NASA just chose for an additional round of funding to study in more detail as part of their Innovative Advanced Concepts (NIAC) program


Titan is unique in the outer solar system in that it is the only one of the bodies outside the Earth with liquid lakes and seas on its surface. The Titanian seas, however, are not composed of water, like Earth’s seas, but are seas of liquid hydrocarbons. What lies beneath the surface of Titan’s seas? We propose to develop a conceptual design of a submersible autonomous vehicle (submarine) to explore extraterrestrial seas. Specifically, to send a submarine to Titan’s largest northern sea, Kraken Mare. This craft will autonomously carry out detailed scientific investigations under the surface of Kraken Mare, providing unprecedented knowledge of an extraterrestrial sea and expanding NASA’s existing capabilities in planetary exploration to include in situ nautical operations. Sprawling over some 1000 km, with depths estimated at 300 m, Kraken Mare is comparable in size to the Great Lakes and represents an opportunity for an unprecedented planetary exploration mission. This mission would be a logical follow-on to a Titan surface mission such as TiME (Titan Mare Explorer) or even a component of a flagship mission of multiple vehicles. The mission concept we propose to study will investigate a full spectrum of oceanographic phenomena: chemical composition of the liquid, surface and subsurface currents, mixing and layering in the “water” column, tides, wind and waves, bathymetry, and bottom features and composition. Measurements of all these aspects of Titan’s hydrocarbon ocean environment can only be made through focused in situ exploration with a well-instrumented craft.

The concept is for a robotic submarine that will be about the size of a car.


Somewhat similar to an Earth-based submarine, the cylindrical vessel about the length of a car would plunge through the thick atmosphere of Titan and dive into its largest liquid hydrocarbon sea, Kraken Mare. Here, it would explore the subsurface region for 90 days, sending data and images back to Earth. It would travel at a rather sedate one meter per second (2.2 miles per hour) using four propellers at its back, enabling it to cover a planned route of 2,000 kilometers (1,200 miles). Instruments on board would include sonar, a sampling system and a camera to answer questions such as whether there could be life on Titan, which is up for debate.

There are many technical challenges to overcome in such a mission, beyond simply getting a vehicle that size all the way to Saturn and delivering it to Kraken Mare.  To begin with, as it says, they're looking to design a submarine to move in liquids, but they don't know what's in the Kraken sea.  Is it all liquid methane?  On top of that, it's very, very cold out at Titan.  These hydrocarbon seas are -180°C (-300°F).  Is it colder at depth?  Do parts of the sea freeze out slightly below the surface and make the entire mission impossible?   In their diagram, it mentions insulation, but not heating.  While it's true silicon electronics often works better cold than at room temperature, that's at -55C vs +25C. I'm not aware of any class of electronic components that are specified to operate at -180C. 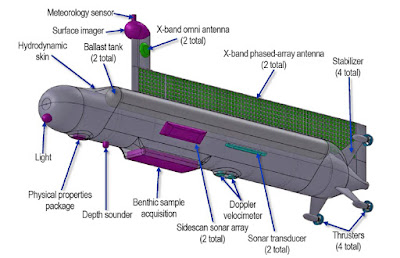 (Proposed vehicle)
I see problems with the antenna concept (green area in the top illustration).  An antenna of that size will be high gain, but it will be very, very narrow area coverage.  I don't think a vehicle floating in an "ocean" would be stable enough to link back to earth.  I think it would more likely be better to communicate with a local space craft in Titanian orbit and have that one beam back to Earth.

Some of us who worked tangentially around NASA have remarked that NASA's biggest post-Apollo accomplishment has been to get stuff done despite their leadership.  I'd like to live lone enough to see something like this, but I have a hard time thinking it will happen.