Shaky Economies From East to West

Greece shook the US markets this Tuesday.  For a day, anyway, after which they seem to have shaken it back off.  In my mind, the 300 point drop can hard be called a "correction" (<2%), so the smallness of the drop is interesting.  I suppose they were worrying that the zombie apocalypse was going to start the next day and when it didn't they went back to - SQUIRREL!!! - their normal mode, which is that as long as Janet keeps sticking money in their pockets, they'll keep cranking up the market.  Even with that, the DJIA closed well under 18,000  (17,730 today) which is down from the first of the year.

But don't think of Greece as an isolated case of a really badly run economy.  In fact, Greece is the rule, not the exception.  According to Credit Suisse, Greece has total debt – including households, businesses, and government – equal to 353% of GDP.   But U.S. debt is even higher at 370%.  Germany, that supposed paragon of the European Unions highest financial virtue, has 302%. China, with its state-controlled economy, is at 250%.  Did you notice that China's Shanghai stock market is down over 20% in the last 30 days?  The Shenzhen stock market has dropped over 30% as well.

On the other hand,  a debt to GDP ratio of either Greece's 353% or our 370% is great compared to Britain. It has total debt equal to 546% of GDP.   Japan is in an even worse state. Its total-debt-to-GDP is 646%.  And if the Credit Suisse numbers are correct, Ireland is off the charts with total debt equal to more than 1,000 times GDP.

Will there be a "Grexit" after all of this plays out?  I don't know.  It seems most Greeks want to stay in EU and prefer the Euro over their old currency, the Drachma.  I've read the same about the other countries; notably Ireland, Italy, and Spain, all of them larger economies than Greece.  It's said that the European Union is more a political union than an economic one, and people want to stay in the EU for those reasons.

But the takeaway is that these problems are not unique to Greece or the EU.  The entire world is awash in debt, addicted to the transient high of growth being pulled in from the future and accelerated.  Greece is the focal point this week, but it will be somewhere else soon enough.  It can be anywhere.  At some point, the money creation will stop and interest rates will have to go up.  The sense of today's jobs reports is that the often talked-about September rate hike is less likely than it had been.  Interest rates simply have to go up at some point.  That storm will unavoidably rage. 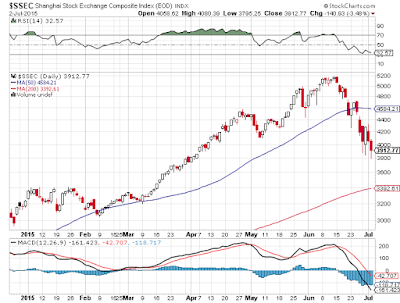