As usual, I didn't get as much done today as I would have liked but that's pretty much always the way it goes.  Today was our 4th of July holiday at Major Avionics Corporation and we spent the day goofing off.  The only real project was to figure out how to smoke a few pounds of chicken wings and shrimp. 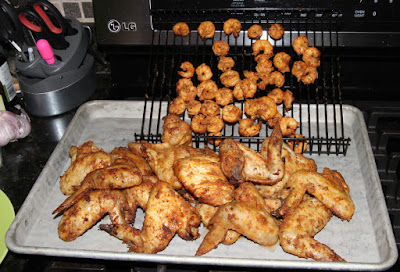 We'll have to go easier on the cayenne next time, but otherwise everything was great.   They don't spend much time in the smoker, only an hour and a half, so it's a milder flavor.  In addition, I used fruit woods (apple and cherry) both of which give a milder flavor.  Still came out really good and made it too easy to eat too much.

Got the summer slows.  Need to throw a few rounds downrange, and do a little fishing.  Saltwater fishing is slow this time of year, pretty much first light until about 9, really slow through the heat of the day, and then back around sunset.  Some of it is best after dark.

I think the craziest thing I've ever done on the 4th of July was century bike ride (100 miles).  I recall stopping at some convenience store and rubbing ice up and down my arms.  Too hot to spend the whole day outside this time of year.