In a shocking story posted this afternoon to the New York Post, and picked up by the Drudge Report, author Paul Sperry reveals that the President whom the people had hoped would heal race relations in this country is taking unprecedented measures to make those relations worse than ever before.  Paul Sperry is a Hoover Institution media fellow and author of the book “The Great American Bank Robbery,” which exposed the racial politics behind the mortgage bust (Google Community Reinvestment Act - or search this blog's many postings on it). The administration is obtaining unprecedented information in order to prove racism.  They're doing this by data mining every piece of data the Fed.gov can get their hands on:


This Orwellian-style stockpile of statistics includes a vast and permanent network of discrimination databases, which Obama already is using to make “disparate impact” cases against: banks that don’t make enough prime loans to minorities; schools that suspend too many blacks; cities that don’t offer enough Section 8 and other low-income housing for minorities; and employers who turn down African-Americans for jobs due to criminal backgrounds.

Remember what I was saying a couple of weeks ago about "disparate impact theory"?  Here it is at the point of a bayonet.  The recent Supreme Court ruling I was talking about in that link said you could be successfully sued for discrimination even if your intent was not to discriminate and you did everything in your power not to discriminate, as long as a disparate impact can be shown.  Big Brother Barack wants the databases operational before he leaves office, and much of the data in them will be posted online, so civil-rights attorneys and urban activist groups will be able to exploit them to show patterns of “racial disparities” and “segregation,” even if no other evidence of discrimination exists.


The granddaddy of them all is the Affirmatively Furthering Fair Housing database, which the Department of Housing and Urban Development rolled out earlier this month to racially balance the nation, ZIP code by ZIP code. It will map every US neighborhood by four racial groups — white, Asian, black or African-American, and Hispanic/Latino — and publish “geospatial data” pinpointing racial imbalances.

The agency proposes using nonwhite populations of 50% or higher as the threshold for classifying segregated areas.

Federally funded cities deemed overly segregated will be pressured to change their zoning laws to allow construction of more subsidized housing in affluent areas in the suburbs, and relocate inner-city minorities to those predominantly white areas. HUD’s maps, which use dots to show the racial distribution or density in residential areas, will be used to select affordable-housing sites.

HUD plans to drill down to an even more granular level, detailing the proximity of black residents to transportation sites, good schools, parks and even supermarkets. If the agency’s social engineers rule the distance between blacks and these suburban “amenities” is too far, municipalities must find ways to close the gap or forfeit federal grant money and face possible lawsuits for housing discrimination.

Did you enjoy the 2008 subprime mortgage crisis and collapse?  They're working full tilt to create another one.


Meanwhile, the Federal Housing Finance Agency, headed by former Congressional Black Caucus leader Mel Watt, is building its own database for racially balancing home loans. The so-called National Mortgage Database Project will compile 16 years of lending data, broken down by race, and hold everything from individual credit scores and employment records.
...
The FHFA will also pry into your personal assets and debts and whether you have any bankruptcies. The agency even wants to know the square footage and lot size of your home, as well as your interest rate.

CFPB is separately amassing a database to monitor ordinary citizens’ credit-card transactions. It hopes to vacuum up some 900 million credit-card accounts — all sorted by race — representing roughly 85% of the US credit-card market. Why? To sniff out “disparities” in interest rates, charge-offs and collections.

Just like everything with this virulently racist administration, everything ... everything ... is seen through the distorted prism of race.  No economic decision, no credit card purchase, no school punishment, nothing will be exempt from racial "balancing".  If black students behave worse than other groups, be they Asian, Hispanic or especially white, and those misbehaving students get disciplined more often, the schools will be punished.  If they are enrolled less often in programs for the gifted, the schools will be punished.

I know I've lifted a lot from the NY Post article, but you should definitely go read the whole thing.  As author Paul Sperry concludes:


Such databases have never before existed. Obama is presiding over the largest consolidation of personal data in US history. He is creating a diversity police state where government race cops and civil-rights lawyers will micromanage demographic outcomes in virtually every aspect of society.

The first black president, quite brilliantly, has built a quasi-reparations infrastructure perpetually fed by racial data that will outlast his administration. 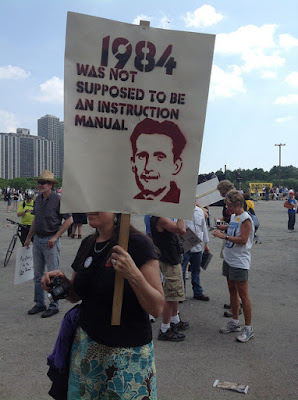