I get the daily Ammoland Shooting Sports News, and an article on whether we're seeing a fundamental turning point in the war against guns led me to an unexpected and interesting group: Doctors for Responsible Gun Ownership.  The Ammoland article was talking about how flat the president's last speech went, and contained the quote:


At the same time, notice how flat the response to his speech has been from all sides. No one outside his administration is strongly defending his approach to ISIS. His partisans seem happier to jump on the ‘blame guns’ bandwagon again than to critique the absence of leadership that is so glaring to non-partisans.

Which led to the quote that really caught my eye:


Normally one just stays calm and holds on—to one’s gun, to one’s honor, to one’s temper. But this is beyond comprehension, even for a psychiatrist.

Yes, the article was by Robert B. Young, MD, a psychiatrist practicing in Pittsford, NY.  Dr. Young is an associate clinical professor at the University of Rochester School of Medicine, and a Distinguished Fellow of the American Psychiatric Association.

Doctors for Responsible Gun Ownership?  I suppose I shouldn't be surprised.  While I currently don't hang around socially with any medical doctors,  they are pretty rational people, inclined to strict empirical science.  We hear about the bad ones, the ones who have issued politicized studies, like the infamous "a gun in the family is 43 times more likely to kill a family member than a criminal" that has been debunked many times.  (The doctors who committed this fraud were Arthur L. Kellerman, and D.T. Reay, in the New England Journal of Medicine, June 12, 1986.) and we hear about our anti-gun surgeon general, Dr. Vivek Murthy who is always trying to get guns declared a health issue (so he can get rid of them).  It's about time we hear about the rational doctors.

Their website contains a paper on "What to Do When Your Doctor Asks About Guns" that might be helpful.

It's worth looking around over there. 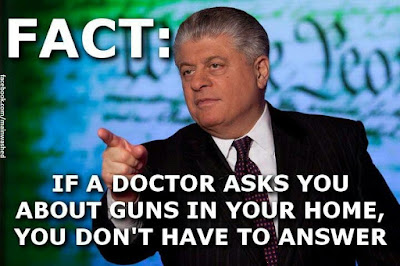