Attorney General Loretta Lynch hit a new low, even in the sordid history of this administration, by saying about the San Bernardino Christmas Party Massacre:

“We’re at the point where these issues have come together really like never before in law enforcement thought and in our nation’s history and it gives us a wonderful opportunity and a wonderful moment to really make significant change.”  [emphasis added: SiG]

Honestly, to look at a horrific terrorist attack on the US homeland; Islamic terrorists attacking and killing a group of people having an office Christmas party, and to call it wonderful in any way is beyond tone deaf to outright evil.  Rahm Emanuel saying, "you never want to let a good crisis go to waste" is tone deaf.  This is way beyond that.

But instead of condemning the terrorist attack, the Attorney General said she was more concerned about "anti-Muslim rhetoric".  Because, you know, something like 1 Muslim is inconvenienced for every 10 or 20,000 people they kill.  Speaking at a Muslim Advocates dinner


...Lynch said since the terrorist attacks in Paris last month, she is increasingly concerned with the “incredibly disturbing rise of anti-Muslim rhetoric … that fear is my greatest fear.”

The fear that you have just mentioned is in fact my greatest fear as a prosecutor, as someone who is sworn to the protection of all of the American people, which is that the rhetoric will be accompanied by acts of violence. My message to not just the Muslim community but to the entire American community is: we cannot give in to the fear that these backlashes are really based on.

Lynch made it clear that she shares those concerns, but vowed to use the DOJ to protect Muslims from discrimination and violence. Noting the rise in violence against Muslims and mosques in the wake of the Paris attacks, Lynch added that, “When we talk about the First amendment we [must] make it clear that actions predicated on violent talk are not American. They are not who we are, they are not what we do, and they will be prosecuted.”

Just like the anti-gun groups who figuratively dance in the blood of every shooting , especially if there are photogenic children involved, Lynch and her pals see the murder of 14 party-goers as a wonderful thing.  They can push harder on their agenda, beat the dead horse of "anti-Muslim" crimes that never seem to materialize.  Repeat the useless cries of "universal background checks" or "terror watch list" until a few more idiots go "golly! that might work!". 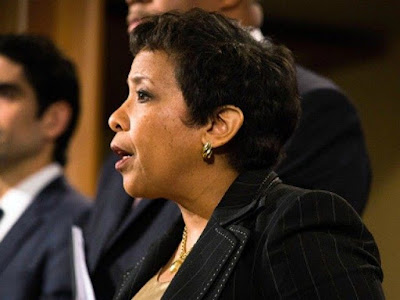