I saw a report this weekend that Bruce Dickenson, the front man for the metal band Iron Maiden, is going to fly the band around for their next tour - in the captain's seat of a 747.


When heavy metal pioneers Iron Maiden set out on their world tour in 2016, lead singer Bruce Dickenson will pull double duty as pilot of the massive Boeing 747-400 that will take the band to concerts in 35 different countries.

That surprised me, but I don't particularly follow metal bands or Iron Maiden.  The article goes on to say that on their last world tour, Dickenson flew them in a 757, a smaller aircraft with much less capability.  The name "Ed Force One" comes from the name of their iconic, sneering "mascot" (zombie? ... or something) Eddie. 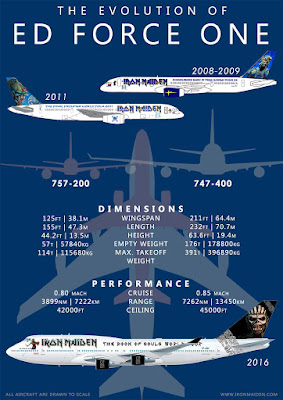 
“When the opportunity arose from my friends at Air Atlanta Icelandic to lease a 747 for The Book of Souls World Tour, of course we jumped at the chance, who wouldn’t? The greatest benefit of travelling in a 747 is that because of its colossal size and freight capacity we can carry our stage production and all our stage equipment and desks in the cargo hold without having to make any of the immense structural modifications needed to do this on the previous 757, the extent of which fans will have noted on the Flight 666 DVD. Although in reality we cannot carry much more gear the savings in complexity, time and cost make using the 747 even more practical. All we will need to do is “paint” it and move a few seats around, with the added advantage that there is much more room for band and crew – our Krew can almost get a row of seats each to catch up on sleep on the flights! Furthermore, it is marginally faster 0.85 MACH and the range of around 7000NM (13,000 km) is much greater which means we will not have to make the refueling stops we needed to with the 757.”

He goes on to say that he's not certified in the 747 yet, so the tour doesn't begin until he gets his captain's rating.

I don't know about you, but a heavy metal band singer flying a 747 for their tour is a new one on me.